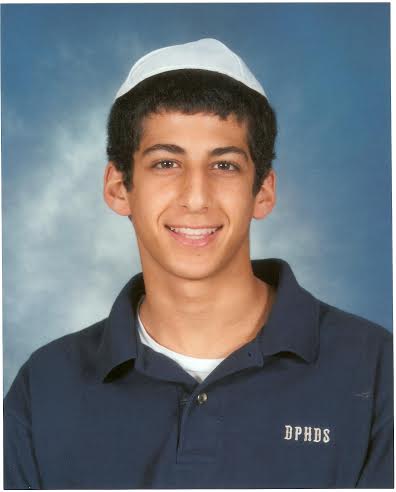 The hardest part of telling Daniel’s story is that it is in the past tense.  Despite heroic efforts and saving his life, it does not have a happy ending.

On April 17, 2006, during Passover, Daniel Cantor Wultz, from Weston, FL, suffered devastating life threatening injuries to most of his 16 year old body.  Standing next to Daniel on an outing in Tel Aviv with his family during their holiday visit to Israel, Daniel’s father also suffered severe injuries when a suicide bomber detonated the belt full of explosives, killing 11 and injuring 70.

At that same moment, I was wrapping up the first blood drive that I organized in Jerusalem for American tourists enjoying the holiday in the city to which our ancestors would ascend annually Passover to bring offerings in the Temple.  While celebrated universally among Jews, Passover also has a deep meaning to Christians who are aware that Jesus was a Jew, he observed Passover as did Jews in his day, and his last meal was a Passover Seder.

In the immediate aftermath of the terrorist attack, Daniel was rushed to the hospital.  On the ambulance, and at the hospital, EMTs and doctors feverishly tried to do everything they could to keep Daniel alive.  In order to sustain his severely damaged body, doctors were challenged to replenish the blood being lost, while at the same time, trying to repair his badly devastated body.

As the doctors rushed to save Daniel, my first organized blood drive for Americans in Israel was wrapping up.  Thirty seven people took time from their holiday to donate blood.  A big success.

But an hour away, there was an even bigger need. Israel’s national blood center responded instantly by dispatching hundreds of units of blood to area hospitals in order to help save all the terrorist’s victims.  In all, Daniel required 80 units of blood just to stay alive in the hours after the terrorist attack.

The doctors were able to stop the bleeding, yet Daniel’s life remained in grave danger.  For weeks, his family prayed by his bedside, recalling better times and hoping that they would again be able to enjoy these together with Daniel soon.  At one point, dozens of students from Daniel’s school in the US arrived to join the family in prayer.  They recalled how he was a great people person.  He loved people, especially his family and friends, and was widely loved as well.  Daniel was known for warm embracing hugs which his friends and family longed to have again, as they hugged and comforted one another.

As the son of a seventh generation native Jerusalemite, Daniel also loved Israel.  Upon arriving in Israel at the beginning of the Passover holiday, Daniel told his parents, “I’m glad to be home.”  At his young age, Daniel understood the centrality of Israel in Jewish life, and loved the feeling of being there.  It was in his blood. Daniel was mature beyond his years.  He had a deep sense of humility and respect for the values and beliefs of others.   Daniel’s ability to respect others enabled him to reach out and be accepted by others in turn.  Daniel never spoke badly of others and if he heard others speaking negatively about their peers, he would actively reach out to encourage them to stop.  Daniel’s friends remembered what a role model he was to them, as well as adults who may have been much older but did not possess his maturity.

Daniel loved sports, especially basketball.  He looked up to Michael Jordan not only for his incredible athletic gift, but for overcoming many personal challenges as a young man to become “the best basketball player ever.”  Daniel respected that Michael Jordan never blamed anyone or felt angry at those who criticized him for not playing well enough.

For Daniel, Michael Jordan embodied the ability to overcome severe challenges. At his hospital bedside, Daniel’s friends and family prayed that somewhere deep inside, Daniel would be able to overcome the life threatening challenges that he faced at the very moment, beseeching God to give Daniel a full recovery.

Daniel loved XBOX, movies, and had a great sense of humor.  Daniel loved flying airplanes, and at 14 ½ flew a jet. Daniel loved life, but two years after the “height” of flying a jet, he lay in grave danger as a result of a terrorist’s hatred.

On Mother’s Day that year, all Daniel’s mother wanted was for her son to be well again.  But on Mother’s Day, just weeks after sustaining the life threatening injuries, weeks after doctors used every imaginable means at their disposal to keep Daniel alive, Daniel’s body succumbed to his wounds and he died.

As an American, Daniel’s death at the hands of a terrorist in Israel, one of dozens, brings the fear of hatred much closer to home, to all Americans.  Daniel was related to Congressman Eric Cantor of Virginia, bringing terrorism in Israel even to the steps of the US Capitol.

Though Daniel’s story has a sad ending, the month that he lived after being the victim of a terrorists’ hatred was a precious time for his family.  On this anniversary, which we’d prefer only to remember the generosity of 37 Americans who donated blood in Jerusalem, it’s important to note how those who have blessed Israel by donating blood in person, or through making a virtual blood donation through Heart to Heart (www.afmda.org/heart-to-heart) genuinely save lives. While those who receive the blood rarely know who donated it, there are countless Israelis for whom this support is simply a matter of life and death.

Thank you for your support that makes saving lives possible.