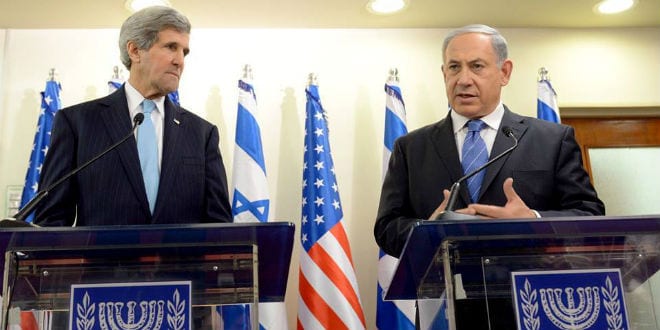 With only weeks left before the planned April 29 deadline to reach an agreement in the U.S. brokered Israeli-Palestinian peace negotiations, the Obama administration has been working overtime to salvage talks that unraveled early last week. Despite the effort, experts are bearish on whether any progress can be made with the parties involved, all of whom are embattled at home and abroad.

Former Mideast peace negotiator Aaron David Miller, vice president for new initiatives and a distinguished scholar at the Woodrow Wilson International Center for Scholars, believes that from the outset, leaders from both sides were incapable of making the tough decisions on core issues that were needed to reach an agreement in these talks.

“Certainly not with Benjamin Netanyahu and Mahmoud Abbas as leaders, and I think it was clear to only but the most woefully obtuse people,” Miller said of the Israeli prime minister and Palestinian Authority president.

“Every time there’s been a breakthrough, you need three ingredients—you have none of them [this time],” he told JNS.org. “Number one, you need pain. Number two, you need gain. Number three, you need leaders. Israeli, Palestinian, and American leaders. You don’t have any of those things. I’m sure there’s pain, but not enough. I’m sure there are prospects of gain, but not enough, and you don’t have the kind of leaders that are masters of their political constituency.”

After months of shepherding by U.S. Secretary of State John Kerry, the talks broke down after Israel delayed (and eventually canceled) the fourth round of an agreed-upon release of Palestinian terrorist prisoners and Abbas moved forward with threats to join 15 international agreements as a member state.

Though Netanyahu displays admirable staying power, according to Miller, he is embroiled in internal battles with right-wing elements of his own Likud party and even more right-wing members of his governing coalition—forcefully limiting his ability to make any significant departures from the status quo.

“From the Israeli perspective, I think the issue of the prisoners was contested within the government, so mainly Netanyahu’s problem is within his own government,” said Boaz Atzili, professor of international politics at American University. “The right wing of the government that sort of gave up on the previous round of prisoner releases decided to stand its ground on this one.”

As far as Israeli politics is concerned, Itamar Rabinovich, Israel’s former ambassador to the United States and president of the Israel Institute, which is based in Washington, D.C. and Tel Aviv, agrees about growing disaffection with Netanyahu among Israeli hardliners.

“There is a powerful lobby in the country and inside the coalition in the government; the settlers would like to see a collapse of the negotiations and a perpetuation of the status quo, and I hope the prime minister asserts himself and takes the leadership,” Rabinovich told JNS.org.

For Abbas, according to Rabinovich, the situation is even grimmer, as his authority is viewed by many Palestinians as illegitimate after he has prevented elections from being held in the West Bank since 2009. His move to join international agreements last week has shored up his base, so to speak.

“The Palestinians certainly now have a sense of empowerment having discovered that the threat to go to the U.N. General Assembly and to go to these 15 agencies, and to move forward if not to complete the march towards formal statehood, is a threat that both the U.S. and Israel are terrified or at least made anxious by, and they are now trying to exploit it and press for much, much, better terms,” explained Rabinovich.

The moves show that the nearly nine months of talks have not engendered any greater trust between Israel and the Palestinians over what existed previously.

“In the Palestinian case, I think they believe that Israel just wants to talk for the sake of talking and is not really interested in reaching a peace agreement,” said Atzili.

In his first public statements after the new developments, Netanyahu on Sunday said that he remains willing to continue talks, but “not at any cost.” He said that Israel could also take unilateral actions.

If the talks were to move forward, argued Rabinovich, Kerry may not be in the best position to conduct them, but the ball is squarely in America’s court if the talks have any chance of rebounding. The effort, said Rabinovich, should include greater investment by President Barack Obama.

“It’s the president’s [responsibility] at the end of the day,” he explained, “and I would say, since there is all this perception and talk about a U.S. shift from Europe and the Middle East to the Pacific, a general sense of lack of success in foreign policy—in Ukraine [and] Iran—this is a place you can make a difference and make a big investment.”

The State Department has blamed both sides for the unraveling of the talks, and has urged both sides to continue discussions. But on Friday, State’s deputy spokesman Marie Harf appeared to be distancing her department from a full commitment to continuing or extending the talks.

“So is there a path forward that both sides can agree to where we can go from here? We are evaluating that right now,” she said.

“There aren’t many things to do,” he said. “You can leave them alone for a while. You can see if you can fix the burgeoning of deterioration of confidence. You can put a U.S. paper on the table; if they won’t accept it, say, ‘Fine, when you’re ready to deal with something real, call me.’ Those are about the only three things you can do.”