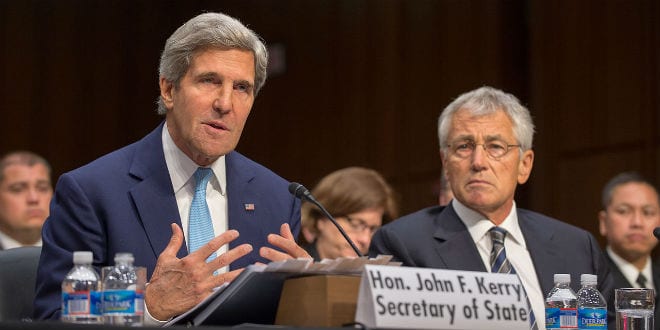 United State Secretary of State John Kerry has joined the blame game on Tuesday when he said both the Israelis and Palestinians were responsible for the collapse of current peace talks.

Testifying before the Senate Committee on Foreign Affairs, the Secretary of State expressed that he hopes to see both sides continue to negotiate in the future but also stated that the U.S. has a “limit” in their overall involvement during the negotiation process.

“There are limits to the amount of time the president and myself can put into this, considering other challenges around the world, especially if the parties can’t commit to being there in a serious way,” Kerry told the hearing.

However, Kerry placed majority of the blame on Israel.

“Both sides wound out in a position of unhelpful moves,” Kerry said, which he believes led to the overall stalemate.

“The prisoners were not released by Israel on the day they were supposed to be released and then another day passed and another day, and then 700 units were approved in Jerusalem and then poof – that was sort of the moment,” Kerry said.

Originally planned for March 29, the fourth batch of Palestinian prisoner release was set to occur as per a previous agreement last year that brought back both sides to the negotiating table. Israel blocked the release of the Palestinian terrorists due to the Palestinian Authority making increased demands on Israel while refusing to commit to future peace talks.

On April 1, Israel reissued approval for the construction of 708 homes in the East Jerusalem neighborhood of Gilo. That same day, PA President Mahmoud Abbas submitted 15 applications to join international UN bodies. His move comes as a first step towards international recognition and statehood.

“The treaties were unhelpful, and we made that crystal clear to the Palestinians,” Kerry said.

The secretary mentioned Israel’s demand to be recognized as a Jewish state by the Palestinians. He said that while recognition should be part of a final peace agreement, the issue should only be added at the end of the process. Recognition has become a core issue for Israel.

In response to Kerry’s testimony, Senator John McCain told Kerry that “talks, even though you might drag them out for a bit, are finished.”

The State Department, in an attempt to diffuse the notion that Kerry blamed Israel unfairly, said that the secretary views both sides at fault.

“As has been throughout this impasse, today Secretary Kerry was again crystal clear that both sides have taken unhelpful steps and at no point has engaged in a blame game,” spokeswoman Jen Psaki said.

“Today he even singled out by name Prime Minister Netanyahu for having made courageous decisions to bring the process this far. Now it is up to the parties and their leaders to determine whether we maintain a productive path,” she added.

The Republican Jewish Coalition (RJC) strongly condemned the Secretary of State’s comments. RJC Director Matt Brooks said, “After almost nine months of negotiations, during which Israel took concrete steps to advance the process, including the release of 78 prisoners – many of them terrorists – it is outrageous for Secretary Kerry to blame the Jewish state for the apparent failure of the diplomatic process undertaken at his insistence.”

Brooks said that “the simple fact is that Israel has supported the peace talks, the Palestinians have consistently undercut them.”

“Secretary Kerry’s testimony today is a troubling consequence of the Obama administration’s assumption that increasing the pressure on Israel will bring the Palestinians back to a process they have repeatedly rejected,” he added.