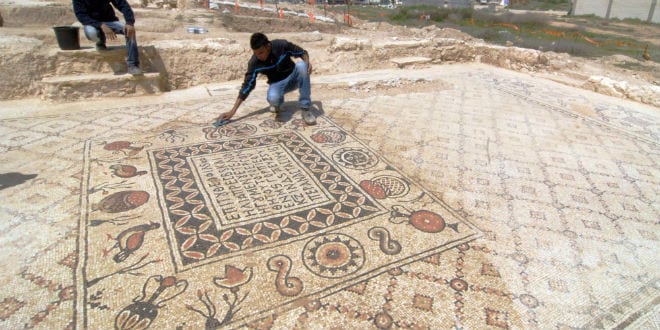 The Israeli Antiquities Authority unveiled to the public this week a newly discovered monastery in Israel’s Negev region. The monastery, which was excavated near the Bedouin village of Hura, was accidentally discovered during construction of a new interchange on the road leading to the village.

Archaeologists believe that the monastery dates back to the sixth century. Among some of the discoveries were pots, bowls, glass objects, and coins. However, what is so fascinating about the find are the almost intact mosaic floors which are decorated with geometric patterns.

The floor of the prayer hall has leaves in various colors framed by three borders with three distinct patterns. Vibrant blue, red, yellow and green colored tiles decorate the floors.

The floor of the dining hall is decorated with geometric shapes, colorful birds, baskets, flowers, pitchers, leaves, and amphorae. The images are set on a diamond shaped background.

The inscriptions also named the abbots of the monastery – Elijah, Nonos, Salomon, and Ilrion. One of the Greek inscriptions had a Syriac translation next to it.

The monastery is believed to have collapsed at the end of the Byzantine period. Rooms in the eastern wing, which had white mosaic floors, were destroyed by landslide. The western wing was almost completely preserved and revealed on Tuesday.

Daniel Varga, who is leading excavations on behalf of the IAA, said, “It seems that this monastery, located near the Byzantine settlement of Horbat Hur, is one monastery in a series of monasteries situated alongside a road that linked Transjordan with the Be’er Sheva Valley.”

The IAA plans on relocating the monastery to the Wadi ‘Attir agricultural and tourism project next to Hura.