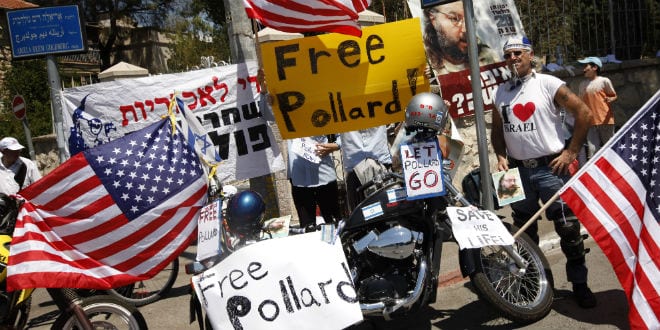 Imprisoned Israeli spy Jonathan Pollard will reportedly be freed by the United States as part of a negotiated settlement to secure the extension of peace negotiations between Israel and the Palestinians.

According to sources in Jerusalem close to the Israeli peace delegation, Israel would have to release the last batch of 26 Palestinian terrorist prisoners, including 14 Arab Israelis, as well as other demands, in order for the U.S. to release Pollard.

The sources told Reuters and the Associated Press that the issue of pardoning Pollard will be discussed between Kerry and Israeli Prime Minister Benjamin Netanyahu. Kerry arrived in Israel on Monday in an unscheduled visit to the region to save collapsing peace talks. The secretary of state left Israel on Tuesday and will most likely return to Israel in the coming days.

The deal would also require Palestinian Authority President Mahmoud Abbas to commit to engaging in peace negotiations until the end of 2014.

The report also stated that American media has been briefed by the White House on the possibility of Pollard’s release. However, the deal is still “far from being assured.”

According to Reuters, Pollard could be released by mid-April. However, an anonymous source told AP that discussions were ongoing and the deal was not yet completed.

Last week, when reports that Pollard was being used as a bargaining chip was first reported, the U.S. State Department denied the reports, stating that “there are currently no plans to release Jonathan Pollard.”

Netanyahu has made clear that he would not release the fourth and last batch of prisoners without approval from his government. The U.S. is hoping that enticing Israel with Pollard’s release will propel the Israeli government to unblock the release of the prisoners.

The Prime Minister’s Office is neither confirming nor denying the reports of Pollard’s release. While House spokesman Jay Carney failed to comment on Pollard’s release, other than saying “He is a person who is convicted of espionage and is serving his sentence, and I don’t have any update on his situation.”

On Tuesday, Housing Minister Uri Ariel told Army Radio that Pollard opposed being released in exchange for Palestinian terrorists. Ariel cited sources close to Pollard who said that the imprisoned spy opposed the “shameful deal.” Ariel said that Pollard is against the release of the “murderers.”

The PA has refused to commit to an extension to talks, blaming Israel for the failure of the current round of peace negotiations. Israel recently blocked the release of the last batch of Palestinian prisoners on the grounds that the PA has not guaranteed that it would engage in future negotiations.

On Tuesday, the PA issued an ultimatum to Kerry – either resolve peace crisis in 24 hours or the PA will begin to seek international recognition.

PA officials presented the U.S. negotiating team with a new list of demands. Demands include the release of 1,000 additional Palestinian prisoners, complete freeze on settlement construction, and the annexation of east Jerusalem.

The issue of prisoner release is a hotly contested issue in Israel. Several governmental ministers have already threatened to leave Netanyahu’s coalition or resign from government in protest. Some 5,000 Palestinian prisoners – who Israel view as terrorists and the Palestinians view as heroes – are being held in Israeli prison.

Update: Israel has reportedly agreed to a U.S. brokered deal that would free Jonathan Pollard in exchange for partial freeze on settlement construction, and the release of several hundred Palestinian prisoners. Talks between Israel and the Palestinians would be extended into 2015. The Palestinian Authority has neither accepted or rejected the deal as of early Tuesday afternoon.