World-Class Chefs Unite to Raise Money for Elderly in Jerusalem 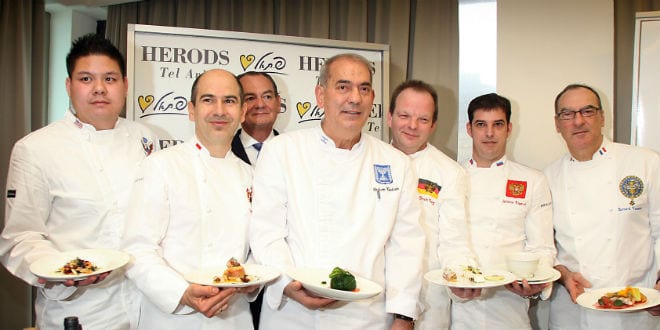 Several top-rated chefs from across Europe will participate in a fundraiser Thursday for Ezrat Avot, an association providing for Jerusalem’s elderly population.

After construction on a new health and life enrichment center for the needy elderly in Jerusalem was halted due to budget constraints, Israeli chef Shalom Kadosh of the Fattal Hotels chain came up with the idea for the event.

According to the charity’s website, “Ezrat Avot was founded in 1976 by Rabbi Sholo Gamiel, a leader of the Yemenite community who immigrated to the state of Israel in Operation Magic Carpet in 1948. At the age of 106, Rabbi Gamliel became so distressed by the poverty of his elderly neighbors in Nachalat Tzvi, Jerusalem that he asked his granddaughter, Naomi Sharabi, to help him provide food and a warm environment for them in his home.”

Donations for Ezrat Avot have been coming in from all over the world for the past 10 years.  Programs run by the association include a Meals on Wheels program; a Senior Citizen Center; a dry food program, which provides groceries to needy elderly and impoverished families throughout the city; special holiday food delivery programs; home maintenance and repairs; and more.

The planned health and life enrichment center will be located in the middle of the Ramot Mall, a vibrant commercial and public center, which will make it both attractive and accessible to seniors.  It is set to offer hot meals daily and include a health and fitness center, with machines and classes available; a full medical clinic with access to all necessary services; a social center; and financial counseling services.  It has been in the planning stages for seven years.

The event is set to take place Thursday evening in the newly renovated Cardo Hall at Jerusalem’s Leonardo Plaza Hotel.  Writer Hanoch Daum will host alongside Sarah Netanyahu, wife of Israeli Prime Minister Benjamin Netanyahu, who is a longtime supporter of Ezrat Avot.