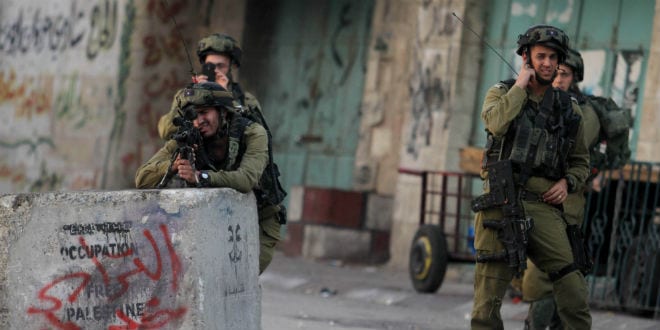 An IDF soldier was stabbed in Jerusalem early Thursday by three Arab assailants.  Nationalistic motives are suspected in the incident, which took place in the Pisgat Ze’ev neighborhood.

The victim suffered light wounds to his leg.  He was treated on scene by Magen David Adom (Israeli Red Cross) workers, then transferred to Hadassah Medical Center, Mount Scopus.

“We were greeted by a man in his 20’s who had appeared to have been wounded by a sharp object in his lower body. He was transferred to Hadassah, Mount Scopus in the capital,” said Eliyahu Fond, a senior Magen David Adom medic, who attended the scene of the attack.

Border police have begun searching the area for suspects.

In a related incident Thursday morning, border police came under attack in Jerusalem when shots were fired in the area of Atarot, north of Jerusalem. A guard post at the entrance to the Qalandiya refugee camp was littered with bullets from an M-16 rifle. Thankfully, no injuries were reported.

According to the IDF, the Qalandiya checkpoint is known for frequent clashes between IDF forces and Palestinians.

The assaults follows other, similar incidents in the past year, which include a January stabbing near the city’s Damascus Gate, and another one the previous July, in the same vicinity.  Eariler this month, an ultra-Orthodox man was also stabbed in the central city of Petah Tikva, and in November, a Jewish youth was knifed in the Muslim Quarter of Jerusalem’s Old City, as he left the Western Wall.

Update: Israeli Police reported Thursday afternoon state that the soldier involved in the stabbing confessed to fabricating the incident.