As Syrian War Rages On, the IDF Sets its Sights on Saving Lives

Home » As Syrian War Rages On, the IDF Sets its Sights on Saving Lives 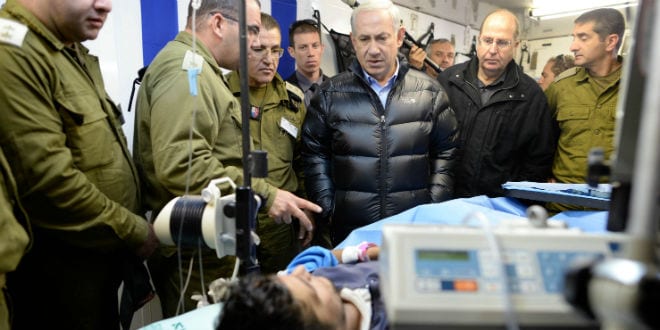 As the civil war continues to rage on in Syria, with an estimated 130,000 people killed and millions displaced after nearly three years of fighting, Israel has been quietly providing aid to some of the wounded. Since the Israeli army began its humanitarian efforts, officials estimate that hundreds of Syrians have received treatment at medical centers in Israel or at a field hospital operated by IDF medical personnel along the border.

Patients have come from as far away as Homs, three hours to the north. While most of the victims are casualties of the civil war, there are some exceptions. Oscar Embon, the director of Ziv Hospital Safed, said that the facility recently hosted four healthy women who crossed the border to give birth and then returned back to Syria.

Israel and Syria are bitter foes that have fought three wars, with countless smaller incidents and military scuffles over the years. The endeavor of the IDF field hospital as well as caring for the wounded in Safed and Nahariya hospitals have cost between $40 – $60 million so far, and is a triumph of humanitarianism over geopolitical concerns.

“We are saving the lives of our enemies,” said Col. Tarif Bader, Chief Medical Officer for the IDF Northern Command.

The Free Syrian Army has been in contact with Israel and has arranged numerous transfers of serious medical cases of their wounded as they cannot be treated at Syrian hospitals being on the wrong side of the conflict. Wounded Syrians are picked up at the border by the IDF and brought to either an Israeli hospital or IDF field hospital where they receive free treatment.

With a situation that has been described as “arguably one of the world’s worst humanitarian crises since the end of the Cold War,” hundreds of refugees have flocked to Israel for medical treatment since the outbreak of the conflict. More than 700 Syrian refugees have been treated in Israel since the start of 2013, many of whom are children. Some very complex moral dilemmas are created by this situation for Israel’s Health Ministry and the IDF, who have taken upon themselves the care of these patients.

One organization, LIBI, is seeking to further the humanitarian efforts of the IDF around the world by supporting the life saving field hospitals manned by highly trained IDF soldiers and reservists. Members of the elite IDF Field Hospital unit are ready at a literal moments notice to bring disaster relief both in Israel and abroad.

While Israel has a tradition of offering humanitarian assistance in war zones and natural disasters around the world, even where it is not particularly welcome, treating Syrians, whose country is still officially at war with Israel, is not only a logistical miracle but an extraordinary exercise in humanity trumping hate.

According to a recent report in the Christian Science Monitor, the Director-General of Nahariya hospital said: “It’s important as a human being to be able to help others as a human being. I thank my government … that gives us the opportunity to help each other. They are human beings. I don’t believe that anyone in this hospital believes they are enemies.”

Yoav Hoffman is a senior physician in the Nahariya pediatric intensive care unit. His unit has treated about 25 Syrian children, ranging in age from a few months to 17 years old.

“The Syrian patients generally come to a similar conclusion. At first they were frightened … they thought we would harm them and torture them. Then after a few days they understood what we were doing and they didn’t want to leave,” he said.

Neither the Hospital staff nor the IDF know whether they are treating civilians or soldiers. Some patients offer their own accounts, though there is no way of verifying them. However, things have changed once again. Syrian patients recovering in Israeli hospitals are pleading with Prime Minister Benjamin Netanyahu to “save the Syrian people.”

“I’ve always thought of Israel as an enemy state that is not willing to help us. My case changed my thinking entirely. Israel is a good country that saves our lives, while the Syrian regime murders its citizens,” one of the Syrian patients currently treated at the Ziv Medical Center in Safed told Ynet news.

Those who can speak have one message for Prime Minister Benjamin Netanyahu: “Keep attacking in Syria in order to save the Syrian people from Assad.”

Another of the young, wounded Syrians in Safed expressed support for Israeli strikes against his country. “I heard several days ago that Israel struck a military base in Syria. This move should have been executed a long time ago to help us bring down the terrorist regime in Syria. I wasn’t sad because of the strike, but rather quite happy.”

The 25-year-old rebel denounced the actions of Hezbollah and its Iranian backers: “I also heard of Israeli soldiers who were injured in the Golan Heights, apparently by Hezbollah militants. I oppose the organization, Iran and Russia. Most of the Syrian citizens do not want them around and demand for them to not intervene in the war.”

According to him, the most important task is to get Hezbollah out of Syria: “We call to stop the war, but as long as Assad is president then the war will continue. We call on the Israeli government to repeatedly attack every army base in Syria in order to help us remove Hezbollah militants from the country, who love to murder Syrians and destroy the country.”