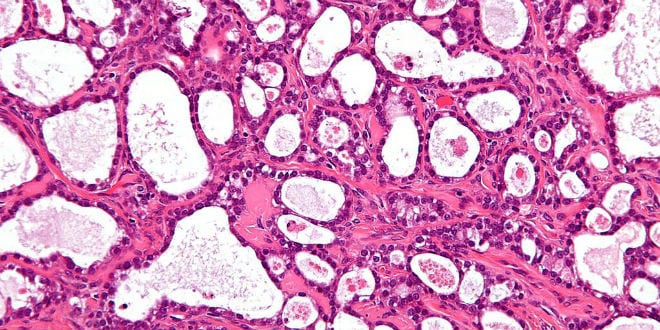 Ovarian cancer is one of the most aggressive and fatal reproductive cancers affecting women.  According to the American Cancer Society, one in 72 American women will be diagnosed with ovarian cancer, and one in 100 will ultimately die of the condition.  Chemotherapy, the common treatment for cancer, is limited in its efficiency, while producing devastating side effects.  Now researchers at Tel Aviv University have developed a delivery system for the treatment which increases its effectiveness while reducing the risks.

Prof. Dan Peer of Tel Aviv University’s Department of Cell Research and Immunology sought a new way to administer chemotherapy, and, along with his team, developed a nanoparticle cluster called the gagomer. The cluster is made from fats coated in polysugars and contains the chemotherapy drugs. The clusters target the tumor and release the drugs slowly, killing the tumor over 24-48 hours.

The problem with traditional chemotherapy treatments is that the tumors reject the drugs, flooding healthy organs with dangerous toxins. The drugs do not remain in the cancer cells long enough to damage them, but they destroy the surrounding tissue. With gagomers, cancer cells are targeted specifically, and receptors in the tumor cells, triggered by the polysugars, release the drugs over time so that they cannot be expelled.

“Tumors become resistant very quickly,” Peer said in a statement. “Following the first, second and third courses of chemotherapy, the tumors start pumping drugs out of the cells as a survival mechanism. Most patients with tumor cells beyond the ovaries relapse and ultimately die due to the development of drug resistance. We wanted to create a safe drug delivery system, which wouldn’t harm the body’s immune system or organs.”

This is what happened to Peer’s mother-in-law.  “She received all the courses of chemotherapy and survived only a year and a half,” he said. “She died from the drug-resistant aggressive tumors” at the age of 54.

During the study on laboratory mice, the team observed a 25-fold increase in tumor-accumulated medication and a dramatic dip in toxic accumulation in healthy organs.  Peer’s team consists of Keren Cohen and Rafi Emmanuel, from Peer’s Laboratory of Nanomedicine and Einat Kisin-Finfer and Doron Shabbat, from TAU’s Department of Chemistry.  The study was published in February in the ACS Nano journal.

“At the end of the day, you want to do something natural, simple and smart,” Peer said. “We hope the concept will be harnessed in the next few years in clinical trials on aggressive tumors.”