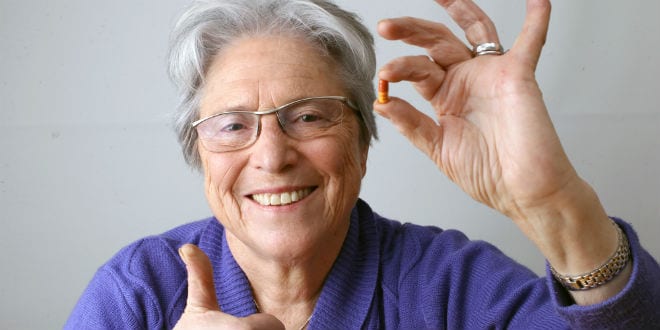 Professor Marta Weinstock-Rosin will be awarded the Israel Prize, the country’s highest recognition, for her contributions to the field of medicine.  Weinstock-Rosin, born in Vienna in 1939, fought adversity to research and develop the world’s leading Alzheimer’s treatment, marketed by Novartis as Exelon.

Weinstock-Rosin fled Vienna with her family when the Nazis came.  She was only four at the time.  She grew up in England, where she had to fight for the right to study science.  The girls’ school, she told Globes magazine, didn’t have a sufficiently rigorous science program, so she studied at the boys’ school.  When she applied and got accepted to medical school, her father worried she would never marry.

Weinstock-Rosin did marry, however.  Her husband, Professor Arnold Rosin, is a leading gerontologist.  She obtained her BPharm and MSc in pharmacology at the University of London, followed by a PhD in pharmacology at St. Mary’s Hospital Medical School, and went back to the University of London as a lecturer.  As an observant Jew and working mother, Weinstock-Rosin faced opposition and ridicule throughout her career in British academia, but the final straw came when she was passed over for advancement, being told, “You are not one of us. You do not eat with us and you never make it to Christmas parties.”  After that, in 1969, she, her husband and their children moved to Israel.  Today, the couple have four children and twenty grandchildren.

Rosin got a position in a hospital in Rehovot, while Weinstock-Rosin joined the faculty of Tel Aviv University.  She later took a research sabbatical to the US National Institutes of Health (NIH) and received a grant from the NIH’s National Institute on Drug Abuse for her research on the mechanism of action of opiates in 1976-1977.  Following that, in 1981, she became a professor at Jerusalem’s Hebrew University.  In 1983, she served as head of the university’s School of Pharmacy.  It was there that she developed Rivastigmine, known commercially as Exelon.

A chance reading of an article in Science magazine led to the amazing breakthrough.  Weinstock-Rosin was working on research to counter the effects of opiates on breathing, but the drug she developed, while having the desired effect on acetylcholine in the brain, did not reach the brain stem, where it was needed.  It worked only in the brain’s frontal lobe.

“I’ve always been fascinated by science,” she told Globes magazine in May, “and suddenly, or maybe it was a message from heaven, I read that Alzheimer’s is characterized by a deficiency of acetylcholine in the hippocampus and frontal brain, the absence of which is somewhat related to cognitive impairment. I remember standing there, without someone to talk to, but I rushed to the lab and I said to myself: ‘I must make a change in direction.’”

Novartis acquired Exelon from the Hebrew University’s technology transfer company, Yissum.  In 2012, it generated more than $1 billion in sales.  Exelon is the only FDA-approved skin patch for Alzheimer’s treatment.

Weinstock-Rosin also co-developed Ladostigil, alongside Professor Moussa Youdim of the Technion Israel Institute of Technology.  During its development, Weinstock-Rosin discovered that at low doses, Ladostigil prevents brain degeneration and memory impairment in aged rats. The drug is now undergoing Phase II clinical trials in Israel and Europe for the prevention of Alzheimer’s disease.

The Israel Prize is traditionally awarded in a ceremony that takes place on Israeli Independence Day, in the presence of the prime minister, the president, the Knesset speaker and the Supreme Court president.