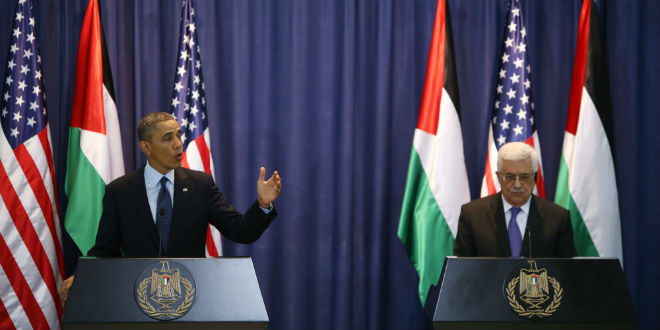 Palestinian President Mahmoud Abbas met with U.S. President Barack Obama on Monday at the White House. Abbas made it clear to the American president that time was running out when it comes to peace talks with Israel.

“We don’t have any time to waste,” Abbas said. “Time is not on our side, especially given the very difficult situation that the Middle East is experiencing and the entire region is facing.”

The meeting between the two presidents comes at a very precarious time. Peace negotiations between Israel and the Palestinians have come to a halt, with both sides expressing extreme pessimism regarding the future of any peace.

U.S. Secretary of State John Kerry expressed his disappointment that both sides are unable to overcome “big ticket issues.” He confirmed that trust between Israel and the Palestinians is virtually nonexistent.

During the meeting with Obama, Abbas told Obama that there is “no way” he will ever publicly recognize Israel as a Jewish state. He told the president that he and his predecessors have already recognized Israel under “international legitimacy resolutions” since 1988.

Referencing former PLO Chairman Yasser Arafat’s recognition of the Jewish character of Israel under UN Resolution 181, Abbas said, “Since 1988 and into 1993, we have been extending our hands to our Israeli neighbors so that we can reach a fair and lasting peace to this problem. This was a very courageous step on the part of the Palestinian leadership. And in 1993, we recognized the State of Israel.”

Obama urged Abbas that he would have to take “risks” and make hard political decisions to create peace.

“Everyone understands the outlines of what a peace deal would look like,” Obama said. He assured Abbas that his administration would continue to stress “the importance of rule of law, transparency, and effective reform so that not only do the Palestinians ultimately have a state on paper, but, more importantly, they have one that actually delivers on behalf of their people.”

Speaking on the upcoming release of Palestinian prisoners by Israel, Abbas said that their release “will give a very solid impression about the seriousness of the Israelis on the peace process.” However, Israel announced on Tuesday that it was considering blocking the last installment of the prisoner release due to Abbas’s lack of concessions to Israel.

Chief PA negotiator Saeb Erekat blamed Israel for the lack of progress in peace talks. According to The Associated Press, Erekat said that Israel must choose between “settlements” and peace.

“Is this progress?” Erekat asked, accusing Israel of building more than 10,000 homes in Judea and Samaria in defiance to Palestinian protests.

“We can do it, but I hope and pray that the Israeli government will make the choice: settlements of peace. They can’t have both,” Erekat said.