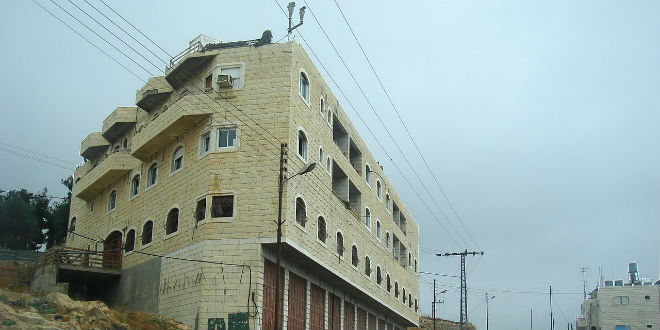 A lengthy legal battle over the ownership of a four-story building in Hebron ended last week when Israel’s high Court of Justice upheld an earlier court’s ruling that its purchase by Jews was, in fact, legitimate.

The building, known as Peace House, was built by Palestinians, but sold in 2007 to American Jew Morris Abraham for $1 million prior to its completion.  Abraham is a descendant of the Jewish community in Hebron which had been expelled by the British for its own protection following the massacre of 1929.  Eight Jewish families moved into the building, where they lived for about a year in bleak conditions, as permits to complete construction were not approved.

Almost immediately, Palestinian owner Faiz Rajabi claimed he had not completed the sale, and that purchase receipts presented by the new Jewish owners were forgeries.  During the legal proceedings, the Jewish residents of the building were forcibly removed by police. 17 Palestinians and 35 Israelis were injured in the ensuing clashes.

Peace House is located on the road between the suburban Jewish settlement of Kiryat Arba and Hebron.  Although it is in Israeli-controlled territory, it is in a Palestinian neighborhood.  Its neighbors include a mosque and a Muslim cemetery.

Following the purchase, local Arabs threatened to kill whoever sold property to Jews, likely prompting Rajabi’s denial.  Video footage of Rajabi counting the money received in exchange for the building, however, undermined his claims.

In its ruling Tuesday, the High Court determined all that was required to complete the transaction was to transfer the remaining $300,000 of the purchase price to Rajabi.  Rajabi, however, was fined 30,000 NIS ($8,600) for tying up to courts with two appeals of the original ruling in the community’s favor.

Support for the court’s decision has rung out from a number of sources.  Hebron Jewish Community spokesperson David Wilder posted enthusiastically on his Facebook page, “We won. We won. We won.”  The Kiryat Arba-Hebron council expressed its belief that the decision would create a positive precedent for other Jewish settlement, particularly in the similar case of another property in Hebron, Machpelah House.

Bayit Yehudi Knesset Member Orit Struck called the seven-year struggle “one of the most shocking proofs of the capriciousness of the government prosecutor who chose to believe the Arab version.” She added, “After five years, the truth has come to light.”

Recognition of the purchase, however, is not enough to allow the evicted families to return to the building.  All new housing in Judea and Samaria must be approved by the Minister of Defense before Jewish owners can move in.  That decision is in the hands of Defense Minister Moshe Ya’alon, who is far more sympathetic to the settlers’ cause than former Defense Minister Ehud Barak, who evicted them.

Construction and Housing Minister Uri Ariel (Bayit Yehudi) called on Ya’alon to pick up where Barak left off. “Today it was conclusively proven that Beit HaShalom belongs to Jews and that its violent evacuation by [former prime minister] Ehud Olmert and Ehud Barak was totally unnecessary. I call on my friend Defense Minister Moshe Ya’alon to allow the Jews to return home.”