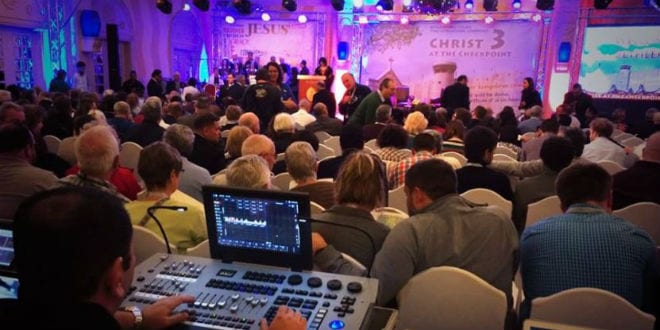 This week marks the third Christ at the Checkpoint conference, a biennial event which purports to “respect the equity and rights of Israel and Palestinian communities.”  While conference organizers insist they support both Israelis and Palestinians, and that all sides of the conflict will be examined, many people, both from within and without the Christian community, are questioning that claim.

The conference, first held in 2010, is sponsored by Bethlehem Bible College (BBC), an institution founded by Palestinian Christians in 1979.  Its mission is  “to challenge Evangelicals to take responsibility to help resolve the conflicts in Israel-Palestine by engaging with the teaching of Jesus on the Kingdom of God.”

The very name of the conference is inflammatory, implying that Jesus, were he alive today, would be a Palestinian held by Israeli soldiers at a checkpoint.  Several points in the conference manifesto have raised eyebrows, as well, including references to Palestinian suffering and injustice at the hands of Israelis, but not to Israeli suffering at the hand of Palestinian terrorists.  Other contentious manifest items include, “Racial ethnicity alone does not guarantee the benefits of the Abrahamic Covenant,” and “Any exclusive claim to land of the Bible in the name of God is not in line with the teaching of Scripture.”

The Israeli government expressed its concerns over the conference immediately.  In a statement by the Ministry of Foreign Affairs, it warned, “The attempt to use religious motifs in order to mobilize political propaganda and agitate the feelings of the faithful through the manipulation of religion and politics is an unacceptable and shameful act. Using religion for the purpose of incitement in the service of political interests stains the person who does it with a stain of indelible infamy.”

The ministry went on to indicate it would keep a watchful eye on known participants and organizers in the future, as they could not be trusted not to harm Israel’s security.  “We have already actively targeted specific participants in the conference, as well as leaders of the groups who will attend the event, in a coordinated effort to expose them to our side of the story,” the MFA told Israel Today.

Mark Tooley, president of the Institute on Religion & Democracy, suggested that the event represented “a wider movement, mostly confined to Evangelical elites, to neutralize a key pro-Israel constituency in America, with hopes of moving the U.S. geo-strategically towards neutrality between Israel and its enemies.

“Unfortunately, their perspective ignores the nasty reality of the Middle East, where democracy, human rights and religious liberty at largely confined to Israel and absent nearly everywhere else,” he said in a statement.

Writer and speaker Dan Calic called the conference “an ongoing effort by the organizers to rewrite history.”

Conference Director Munther Isaac responded to criticism, saying, “These statements and accusations prove that the message of the conference is successful and we assure to them that our goals are not political, but it’s a means to address and talk about the principles of Justice and Peace in a peaceful way.”

Also being condemned are the US, UK and Dutch governments for providing funding for the conference.  Jerusalem-based NGO Monitor reported that several governmental and non-governmental bodies have provided money to the Bethlehem Bible College and the Holy Land Trust, another conference sponsor.

“Direct and indirect funding to the organizers of Christ at the Checkpoint is mystifying and deeply concerning to us,” said Yitzhak Santis, Chief Programs Officer and “BDS in the Pews” Project Director at NGO Monitor.

But according to NGO Monitor, the CATC “seeks to advance the Palestinian nationalist agenda within Evangelical Christian churches, while simultaneously reviving theological anti-Semitic themes such as replacement theology.”

Replacement theology, once popular among Christian denominations, teaches that Christians have replaced the Jewish people as God’s chosen people.  More recently, however, that line of thinking has been rejected and discredited by leaders of the Evangelical movement, such as Pastor John Hagee, founder of Christians United for Israel.

The speakers at CATC “represent are a who’s who of the new, anti-Israel Christian narrative,” said David Brog, executive director of CUFI.

“In the guise of love, they continue a dangerously one-sided propaganda campaign against Israel,” Brog added. “You can’t honestly criticize Israel’s security barrier without discussing the suicide bombings that it stopped. You can’t honestly criticize Israel’s presence in the West Bank without nothing that it would have ended long ago had the Palestinian leadership said ‘yes’ to generous peace offers in 2000 and 2008. But at this particular checkpoint, context and nuance are confiscated at the front door.”