Over 60 Rockets Hit Israel, Terrorists Warned They Will “Pay a Price” (Videos)

Home » Over 60 Rockets Hit Israel, Terrorists Warned They Will “Pay a Price” (Videos) 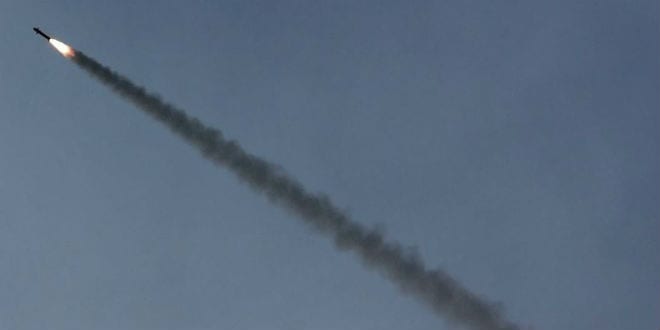 Wednesday night into Thursday morning, terrorists in the Gaza Strip shot over 60 rockets and mortar shells into southern Israel. The attacks are the highest escalation of violence coming out of the Gaza Strip since Operation Pillar of Defense in November 2012.

Five rockets landed in populated areas and three were intercepted by the Iron Dome missile defense system. Israel raised its security alert in the southern region to the highest level. Residents were told to stay within 15 seconds of a reinforced room or bomb shelter should more sirens go off. Israel sealed off all its borders with Gaza. As a retaliatory measure, Defense Minister Moshe Yaalon canceled all visitation rights for Palestinian prisoners in Israeli jails.

Terrorists belonging to the Palestinian group Islamic Jihad have claimed responsibility for the barrage of rockets. Rockets were fired from civilian areas in Gaza. A statement from the terror group said they were attacking Israel in retaliation for killing three of its operatives on Tuesday.

“The Al-Quds Brigades responded to (Israeli) aggression with a volley of rockets,” the terror group said.

However, Hamas is also being blamed since the group is responsible for all attacks emanating from Gaza.

In retaliation for the intense rocket attack, the Israeli Air Force launched strikes on 29 targets in the Gaza Strip. The strikes began shortly after 10 p.m. Wednesday night. The IAF pinpointed strategic targets, including bases of the armed wing of Islamic Jihad and several known Hamas hideouts. Before the airstrike, IDF tanks fired shells at targets in the Gaza Strip.

Israeli Prime Minister Benjamin Netanyahu warned Gaza terror groups before the strike that should the rocket fire not subside, Gaza would feel the wrath of Israel.

“If there is no quiet in our south, no quiet for the residents of Israel, there will be noise, lots of noise in Gaza,” the Prime Minister warned. “And that’s putting it mildly.”

Netanyahu told Israel’s Channel 2 that the attacks “seems to be in response to our counter-terrorism efforts yesterday,” referring to the IAF airstrike that killed three Islamic Jihad operatives. “We will continue to strike those who want to harm us, we’ll act against them very forcefully,” Netanyahu warned.

Defense Minister Yaalon said Israel would defend itself from the attacks and guaranteed a heavy response to terrorism.

“We will not let Islamic Jihad or anybody else in Gaza disrupt the life of Israel’s citizens,” Yaalon said. “When it’s not quiet in southern Israel, it won’t be quiet in Gaza – so that the terrorists will regret their rocket fire.”

Yaalon also added that Hamas, who is also being held responsible for the rocket attacks, “will pay a price” if they cannot control the Gaza territory.

Israel’s Reality in the Face of Gaza Terror

Anonymous military sources have said that Israeli is now waiting to see how Hamas and Islamic Jihad respond to the retaliatory strikes.

Commenting on the missile attacks, Foreign Minister Avigdor Liberman advocated for Israel to retake Gaza, according to AFP.

“Following an attack like this – a barrage of more than 50 rockets – there is no alternative to a full reoccupation of the entire Gaza Strip,” he said.

UK Prime Minister David Cameron, who is in Israel on an official visit, condemned the missile attacks and referred to them as “barbaric.”

“These attacks are completely indiscriminate, aimed at civilian populations and that is a demonstration of how barbaric they are,” Cameron stated. “There is no violent route to statehood” Cameron pointed out, stressing that Palestinians will not gain a state via the means of violence.

The U.S State Department reiterated that Israel has a right to defend itself from the “reprehensible” violence out of Gaza.

“The United States condemns in the strongest terms today’s rocket attacks into Israel by terrorists from the Gaza Strip,” spokeswoman Jen Psaki said. “There is no justification for such attacks. We call for these terrorist attacks to cease immediately. Israel, like any nation, has a right to defend itself.”

Hamas officials said they would hold Israel responsible for any “escalation.” All IDF action would be met with violent resistance.

“We hold the occupation responsible, we warn of the consequences of any escalation and we reiterate that resistance is the right of the Palestinian people to defend itself,” Hamas spokesman Ihab al-Ghassin said.

While Israel has estimated that over 60 rockets had been fired into Israel, Islamic Jihad said it had fired over 90 rockets.

Update: An Egyptian brokered cease-fire between Islamic Jihad and Israel has come into effect 2 p.m. Israel time. Israel has denied the cease-fire, saying only that “quiet will be answered with quiet.”