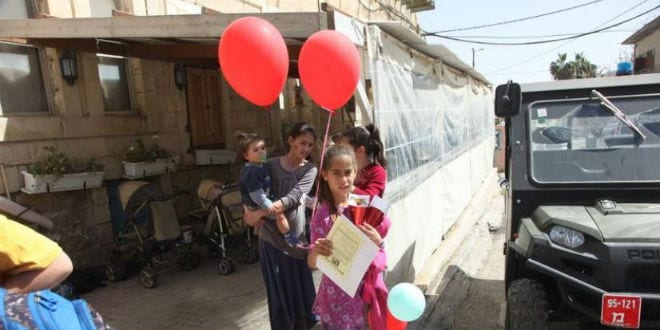 Breaking the Silence, an anti-Israel, anti-IDF NGO which is funded by foreign donors, frequently brings visitors to Hebron to “document” Israeli mistreatment of the local Arab population.  On a recent visit, however, Israel National News reported those activists were greeted by an unexpected sight: Jewish children distributing candy.

With the Jewish holiday of Purim around the corner, the festive spirit is in the air across the country.  Hebron is no exception. The community initiative was intended to combat the slander perpetuated by Breaking the Silence.  Along with sweets, each package distributed by the youth of Hebron contained a pamphlet, in Hebrew and English, entitled “Breaking the Lies”, which exposed the NGO’s links to extremism and combat the slander perpetuated by its activities.

According to Hebron community spokesperson David Wilder, “A lot of people who come in have no idea what they’re getting themselves into, or who Breaking the Silence are,” he said. “They tell a lot of lies and slander the IDF and the people of Hebron.”

“We wanted to show that the people of Hebron aren’t really what they make us out to be.”

Breaking the Silence encourages disgruntled ex-IDF soldiers to speak out against Israel and its army to international audiences.  Many of the allegations it has made over the years are based on hearsay and have been rejected by local residents and the military as slander.

The Hebron tour this past Friday was intended to protest the closure of King David Street to Arabs, a measure taken in response to terror attacks launched from that road.

Wilder explained that not only does propaganda spread by Breaking the Silence and other left-wing NGOs damage Israel’s reputation, it “also acts as a form of incitement” by agitating local Arab populations and encouraging attacks against Jews.

For their part, many activists were bewildered by the young emissaries, but several accepted the proffered gifts.

Says Wilder, “We hope that some of the people will pay attention not only to what they heard from Breaking the Silence, but also to what we have to say.