30 Terrorists to be Released from Prison at End of March 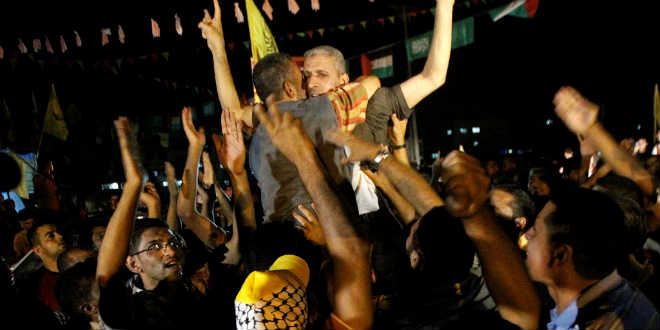 The fourth and final phase of an agreement between Israel and the Palestinian Authority to release security prisoners is confirmed to take place. American officials have guaranteed to the PA that on March 29, 30 security prisoners will be released.

In total, according to the agreement, 104 terrorists who were jailed before the signing of the Oslo Accords in 1993 will be released.

Chief PA negotiator Saeb Erekat told IDF Radio on Sunday that he has been urging PA President Mahmoud Abbas to continue peace negotiations for the sake of the prisoners. Erekat stressed that Abbas is more than ready to walk away from all negotiations but is waiting for the release of the terrorists.

“We put pressure on him to leave and he [Abbas] said, ‘ I will not do that until Israel finishes releasing prisoners for the fourth time, at the end of March,’” Erekat said.

Israel agreed to release the 104 terrorists as a sign of goodwill to the PA. In return, the PA is not allowed to seek membership in any international organizations or sign any treaties until negotiations end in April.

In response to Erekat’s statements, Deputy Foreign Minister Ze’ev Elkin (Likud) suggested that the government should consider delaying its fulfillment of releasing the prisoners. According to Elkin, this would force Abbas and the PA to keep its place at the negotiating table.

In a recent interview with Israel’s Channel 2, Israeli Prime Minister Benjamin Netanyahu criticized Palestinian leadership for their unwillingness to negotiate with Israel.

“Let us see if the Palestinians will be willing to engage in negotiations at all,” Netanyahu said. “From what I see at the moment, they have distanced themselves from it very, very much.”

“They think they can go back down their recalcitrant path, go to making unrealistic demands and go the United Nations, and basically keep themselves from asking the question of where they can concede, they can accept the Jewish state, give up the ‘Right of Return’ – and end the conflict,” the Prime Minister stated.