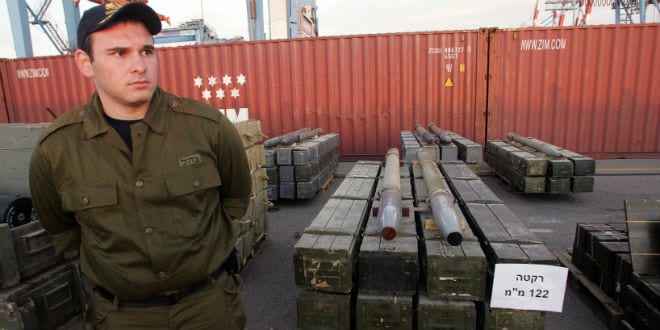 A Syrian made weapons cache on its way to Gaza from Iran was confiscated Wednesday by IDF forces off international waters between Sudan and Eritrea. According to Defense Minister Moshe Yaalon, Israel has diverted disaster by not allowing the weapons cache to fall into the hands of terrorists in the Gaza Strip.

“This operation thwarted a significant threat to Israeli citizens,” Yaalon said. “Those missiles that have been uncovered would certainly have threatened millions of Israelis had they reached the Gaza Strip.”

Sailing under the Panamanian flag, the “Klos-C” merchant ship contained a hoard of weapons, including several advanced Syrian M302 missile. The M302 has a range of up to 200 kilometers (125 miles) and can carry a payload of 170 kilograms (375 pounds). The weapons were hidden among commercial merchandise, packed in crates and camouflaged among sacks of concrete.

Iran, one of the world’s most notorious sponsors of terrorism, supplies arms to terrorist organizations in South America, Syria, Iraq, Lebanon, Afghanistan, and throughout Asia.

“Iran is the number one exporter of terror in the world,” Yaalon said.

The discovery of the weapons cache, according to Yaalon, further incriminates Gaza as a “terrorist entity, an Iranian branch that is financed, armed and trained by Iran.” Yaalon said Israel and the rest of the world must remain vigilant against the deceptions of Iran.

“It must be known that despite smiles, the Iranian regime has not changed, nor have its actions changed,” Yaalon warned.

IDF spokesman Lt. Col. Peter Lerner said that the weapons were “meant for all terror organizations, including Hamas.”

Israeli President Shimon Peres congratulated the IDF on a “brilliant military operation,” calling its success “an extremely important act.” The president called out Iranian leaders and told them they need to “stop bluffing.”

“This operation exposes the true face of Iran which says one thing but does the opposite. They put on an innocent face and send the most dangerous missiles to a terror organization that kills innocents, in violation of international law,” Peres said. “Iran must make up its mind either to tell the truth and respect international law or admit that it is all camouflage and we cannot trust their policy or declaration.”

Peres, who is a major proponent of the two-state solution, views the seizure of the weapons as a step back in the overall peace process.

“We have nothing against the people of Gaza but why are Hamas shooting, why are they buying arms? The time has come for all responsible people to turn to Iran and Gaza and say, stop! For the sake of all those who want to live in peace,” the president said.

The Islamic Republic has denied all connection to the intercepted weapons cache. An unnamed military official told Iranian television network Al-Alam, “We completely deny this report which is totally without foundation.”

Iranian Foreign Minister Mohammad Javed Zarif took to his official Twitter account to express his doubts regarding claims that weapons on board the Klos C were from Iran.

Hamas officials have denied that the shipment aboard the Klos-C was destined for Gaza. Taher Al-Nono, an adviser of Hamas Prime Minister Ismail Haniyeh, told Reuters that the whole incident is a “silly joke.”

“This is a new Israeli lie aimed to justify and prolong the blockade of Gaza,” Al-Nono accused.