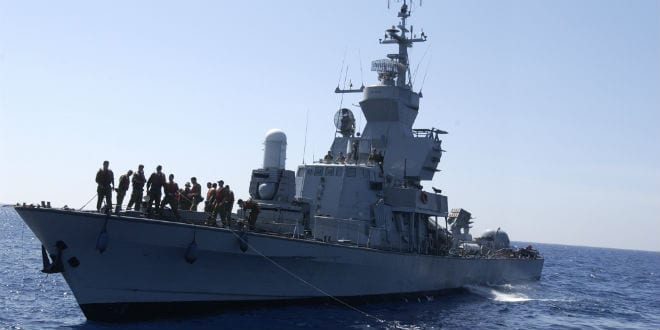 Wednesday morning, IDF naval commandos intercepted an Iranian ship in the Red Sea bound for the Gaza Strip filled with weapons. IDF special forces belonging to the “Shayetet 13” elite unit boarded the Klos C ship and took control of the vessel around 5 a.m. The boat was sailing under the Panamanian flag and offered no resistance.

The covert operation was ordered by IDF Chief of the General Staff Lieutenant General Benjamin (Benny) Gantz upon governmental approval. After boarding the ship, commandos discovered a hoard of concealed weapons and missiles that were dispersed among commercial cargo, such as sacks of cement.

Initial reports stated that the weapons originated from Syria where they were transported via plane to Iran. Once in Iran, the weapons were loaded onto the Klos C and set course towards Sudan.

Klos C was overtaken by the IDF approximately 1,500 kilometers off of Israel’s coast. The Israeli Navy has been tracking the ship for several days in anticipation of the operation. The crew, 17 people in total, were taken into custody and interrogated by Israeli security forces.

According to Defense Minister Moshe Yaalon, the crew did not “appear to have been aware of the vessel’s contents.” The defense minister applauded the success of the IDF and said that the latest weapons interception show the growing terrorist threat emanating from Gaza.

“This Iranian attempt to transfer weapons to the Gaza Strip is additional evidence that Gaza is a terrorist entity under Iranian auspices preparing to strike deep into Israel,”Yaalon stated.

“The IDF will continue to operate against the Iranian attempts to arm regional terrorist organizations, who intend to continuously ignite our borders,” said IDF Spokesman, Lt. Col. Peter Lerner.

“We will continue to employ all the necessary means in order to prevent the armament of terrorist organizations and will combat the Iranian smuggling attempts that threaten the security and sovereignty of the State of Israel.”

Watch how the IDF intercepted the Iranian weapons shipment

The IDF confirmed that among the advanced weaponry were missiles with a range of 200 kilometers (125 miles). The vessel was headed towards Sudan where it was to have unloaded the weapons before being smuggled into Gaza. However, the ship’s captain attempted to fool the IDF into thinking that it was first navigating towards Iraq.

Israeli Prime Minister Benjamin Netanyahu stated upon the conclusion of the raid:

“I would like to commend the IDF, the intelligence services of the State of Israel and – of course – the navy commanders and personnel who carried out a perfect operation to intercept a secret Iranian weapons ship. At a time when it is talking to the major powers, Iran smiles and says all sorts of nice things, the same Iran is sending deadly weapons to terrorist organizations and is doing so via a ramified network of secret operations in order to send rockets, missiles and other deadly weapons that will be used to harm innocent citizens. This is the true Iran and this state cannot possess nuclear weapons. We will continue to whatever is necessary in order to defend Israel’s citizens.”

The Navy is towing the ship back to Israeli shores where it will dock in Eilat.

The Course of Iran’s Weaponry Shipment to Gaza