Netanyahu Stands Up to Obama

Home » Netanyahu Stands Up to Obama 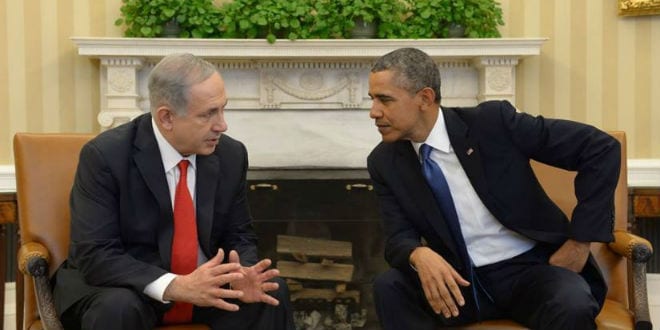 After private talks at the White House that lasted nearly three hours between U.S. President Barack Obama and Israeli Prime Minister Benjamin Netanyahu, one of the main messages the United States is sending to Israel is that now is the time to make tough decisions when it comes to peace.

As the deadline for completing the framework peace agreement between Israel and the Palestinians fast approaches, Obama stated that he still believes a two state solution is possible.

“It is still possible to create two states, a Jewish state of Israel and a state of Palestine, which people living side by side in peace and security,” Obama said. “But it’s difficult. It requires compromise on all sides.”

Obama praised Netanyahu for taking part in “very lengthy, painstaking negotiations.” Over the last eight months, U.S. brokered negotiations have hit some highs and lows. Obama urged Netanyahu to put Israel’s differences aside when it comes to the Palestinians.

“The time frame that we have set up for completing these negotiations is coming near and some tough decision are going to have to be made,” Obama stated. “But I know that, regardless of the outcome, the prime minister will make those decisions based on his absolute commitment to Israel’s security and his recognition that ultimately Israel’s security will be enhanced by peace with his neighbors.”

Netanyahu did not mince words when it came to responding to Obama, especially after an explosive interview with Bloomberg in which Obama threatened Israel with international isolation.

Netanyahu stated that Israel was doing as much as it could to pursue peace, but the job is made more difficult with a partner that refuses to negotiate and responds with “incessant violence.”

“Twenty years of peace process were marked by many Israeli steps for peace, but we got suicide bombers and rockets in return,” the prime minister explained.

Palestinian Authority President Mahmoud Abbas has stated numerous times that the PA would never recognize Israel’s right to exist. Israel has consistently maintained that recognition from the PA is a “minimal requirement” for peace.

“Israel has been doing its part, and I regret to say that the Palestinians haven’t,” Netanyahu told Obama. “The people of Israel know that it’s the case. What we want is peace – not a piece of paper.”

“It’s about time the Palestinians recognize Israel as a Jewish state – we have only been there for 4,000 years,” Netanyahu said.

Netanyahu made it clear that he would never compromise Israel’s security. “The only peace that will endure is a peace that we can defend,” he added.

During the meeting, U.S. Secretary of State John Kerry and Vice President Joe Biden were present in the room. Netanyahu thanks Kerry for his “tireless” efforts to broker peace.

“When I say tireless,” Netanyahu joked, “I mean tireless.”

Obama and Netanyahu briefly touched upon the topic of a nuclear Iran. Netanyahu affirmed Israel’s stance that it would never allow the Islamic Republic to obtain the “ability” to acquire nuclear weapons. Obama reassured Netanyahu that Israel has “my absolute commitment that Iran does not acquire a nuclear weapon.”

Click here to watch the meeting between Obama and Netanyahu