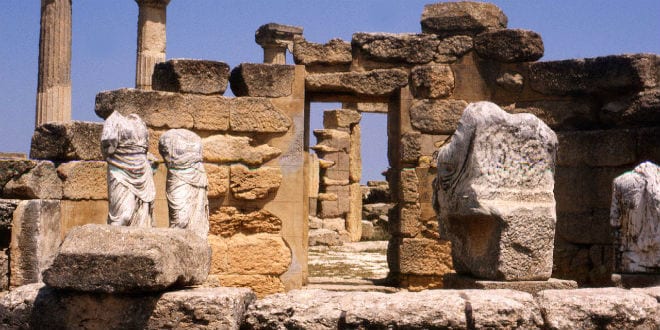 A rare bronze statue was uncovered in Gaza in August, though the discovery only became public this week.  According to reports, a Gazan fisherman, 26-year-old Joudat Ghrab, pulled the 450 kg (1,000 pound) statue from shallow waters just north of the Egyptian-Gaza border.  Hamas authorities seized the statue as soon as they became aware of its existence.

The statue is an exciting find for historians and archaeologists.  It is unusual for a statue to be cast in metal rather than carved from stone or marble, says Jean-Michel de Tarragon, a historian with the French Biblical and Archaeological School of Jerusalem.  “It’s unique. In some ways I would say it is priceless. It’s like people asking what is the (value) of the painting La Gioconda (the Mona Lisa) in the Louvre museum.”

As well, a statue such as this one would not have been kept in isolation, so if the point of origin of the statue can be determined, other artifacts may be uncovered.  “A statue at that time was (put) in a complex, in a temple or a palace. If it was in a temple, you should have all the other artifacts of the cult (at the site),” Tarragon explained, adding that he hoped Hamas appreciated its potential importance.

“There is a feeling that they could find more and more [items] linked to the statue, more and more artifacts, so this is very sensitive,” he said.

Standing 1.7 meters (5.8 feet) tall, the 2,000-plus-year-old statue shows a youthful, athletic Apollo with tight, curly hair.  He stands with one arm outstretched, palm up.  One eye socket is hollow, but the other contains a blue stone iris.  Of course, the statue is unclothed.  In Greek mythology, Apollo is considered the god of light and the sun, truth and prophecy, healing, plague, music, poetry, and more.

According to biblical tradition, the Greeks are descended from Javan, son of Japheth.  Noah blessed his eldest son with beauty, art and culture, saying, “God enlarge [make beautiful for] Japheth.”  In the Hebrew, “Yapht Elokim l’Yepheth,” he uses a play on words linking Japheth to the cognate beauty.

The Apollo statue’s discovery is shrouded in mystery.  According to Ghrab, he saw the figure about 100 meters (yards) off-shore and at first thought it was a badly burned body.  When closer inspection revealed the statue, he called his family to help him haul it ashore.  He claims it took them four hours to pull it from the water, and he brought it home on a donkey.

“I felt it was something gifted to me by God,” Ghrab told Reuters. “My financial situation is very difficult and I am waiting for my reward.”  His mother was less thrilled to have the naked statue in their home.   “My mother said ‘what a disaster you have brought with you’ as she looked at the huge statue,” Ghrab admitted.  She asked that it be covered up.

Ghrab cut off one of the statue’s fingers to have it tested, and unbeknownst to him, so did one of his relatives.  The statue was then posted, by parties unknown, on Ebay with a starting bid of $500,000.  However, Gazan authorities got wind of the discovery and Hamas civilian police forces swept in and seized the statue.  They claim they are investigating the discovery, as well as trying to uncover who tried to sell it illegally.

“We have started an investigation into the background of the statue and its origins,” deputy prime minister Ziad al-Zaza told AFP.

That is apparently a worthwhile endeavor.  Although international experts have not had access to the statue itself, only photographs, they have already expressed doubts about the official account of the statue’s discovery.

“This wasn’t found on the seashore or in the sea… it is very clean. No, it was (found) inland and dry,” Tarragon said.  A statue lost at sea would have been covered in barnacles and shown evidence of metal disfigurement.  He conjectured the true location where the statue was initially found is likely being withheld to avoid arguments over ownership claims.

“We are looking into all aspects of where it came from, that’s to say whether it was discovered in the sea or brought here from somewhere else,” al-Zaza said, acknowledging the possibility it could have been smuggled in.  “We want to know the truth before getting in touch with the relevant (archaeological) authorities here and overseas.”

This discovery could be a real windfall for the isolated Gaza Strip.  The impoverished region is subject to tight restrictions from both Israel and neighboring Egypt.  Since Hamas ousted the Western-backed Fatah in 2007, Gaza has been subject to boycott from the international community.  This statue could open new channels of communication and cooperation between Gaza and other countries.

“At the end of the investigation, the statue will be returned to the [Gazan] ministry of tourism and antiquities which will initiate contact, through the government, with interested international parties, especially in France which is particularly interested in such matters,” al-Zaza said.

According to Mohammed Khalla, Deputy Minister of Tourism and Antiquities for Hamas, “The statue might be loaned out to a well-known French or British museum, which could lead to contacts between Gaza’s government and other governments overseas.”

For now however, experts must be content with a handful of grainy photos and hope that the investigation does not compromise the great discovery.