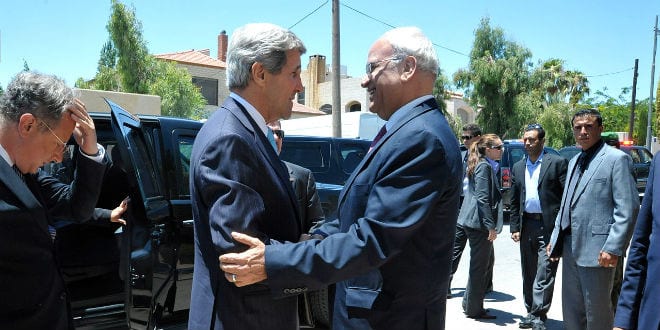 Despite tense moments this weekend in which Israel responded negatively to his veiled threats, its government is cautiously prepared to accept a framework agreement for further peace talks put forward by US Secretary of State John Kerry.  It may be irrelevant, however, as the Palestinian Authority is expected to reject the proposal.

Prime Minister Benjamin Netanyahu was not impressed.  “Attempts to impose a boycott on the State of Israel are immoral and unjust. Moreover, they will not achieve their goal. First, they cause the Palestinians to adhere to their intransigent positions and thus push peace further away. Second, no pressure will cause me to concede the vital interests of the State of Israel, especially the security of Israel’s citizens. For both of these reasons, threats to boycott the State of Israel will not achieve their goal,” he said at the start of Sunday’s weekly cabinet meeting.

Now, however, according to a report by Israel’s Channel 2 news, the Israeli government is willing to sign off on Kerry’s proposed framework agreement.  The agreement, which will be officially presented in the coming weeks, “puts 75-80% of settlers under Israeli rule,” discusses compensation for both Jewish and Palestinian refugees but takes the Palestinian “right of return” off the table, identifies Israel as a Jewish country and is vague on the status of Jerusalem according to US State Department envoy Martin Indyk.  He spoke to American Jewish leaders in a conference call on Thursday.  It should be noted that the State Department announced the next day that the framework had not yet been finalized, and Indyk’s comments should not be seen as a guarantee.

The terms of the agreement would not be binding, but would rather be a starting point for continued negotiations.  The nine-month, pre-determined period for the current negotiations is set to end in April, following the fourth round of prisoner releases in March.  Kerry considers this a deadline for determining the success of the process.

The discussion may be moot, however, as Palestinians have indicated their unwillingness to accept the terms.

Chief Palestinian negotiator Saeb Erekat again reiterated the official Palestinian position that Israel would not be recognized as a Jewish state.  In a panel discussion with Tzipi Livni, Israel’s justice minister and chief negotiator, he dismissed the possibility out of hand.  “When you say ‘accept Israel as a Jewish state’ you are asking me to change my narrative,” he said.  He claimed to be descended from the Biblical Canaanites, who  “lived in the region 5,500 years before Joshua Bin-Nun came and burned my hometown Jericho.”  It should be noted that there is no historical evidence to support an ancestral connection between the Canaanites and the Arabs.

During the panel, Livni championed peace and a two-state solution.  She emphasized that peace would only come when each side recognizes that the right of the other to establish a national homeland with its own unique identity.  On the topic of security, she added, “we will have to be able look at the citizens of Israel in the eye and say that Judea and Samaria will not become a copy of Gaza.”  Erekat scoffed at the suggestion that Israel was under attack, and Livni outlined the rise in terror against Israeli civilians.  She drew praise from unlikely quarters when Saudi Prince Turki Al-Faisal commented, “I understand why you are the Israeli negotiator.”

Meanwhile, intellectuals and political leaders in Jordan gathered to protest the framework agreement as well on Saturday.  Zaki Bani Rsheid, deputy overall leader of the Muslim Brotherhood, told The Jordan Times that Kerry’s political agenda was harmful to both the Palestinian cause and to Jordan.  “He [Kerry] wants to find what he says is a solution to the Arab-Zionist conflict at the expense of Palestinians’ right of return by resorting to the alternative homeland project,” he said.  He stated that no new deals would be accepted by the public.