Is God Playing in this Year’s Super Bowl?

Home » Is God Playing in this Year’s Super Bowl? 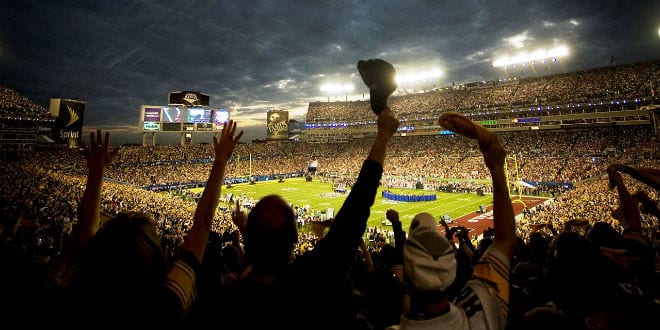 In a recent poll by the Public Religion Research Institute (PRRI), half of all sports fans included in the survey revealed they believe God may play a part in determining the Super Bowl outcome.  1,011 adults were surveyed regarding their sports interests and their beliefs regarding supernatural influences on sporting events.

“As Americans tune in to the Super Bowl this year, fully half of fans—as many as 70 million Americans—believe there may be a twelfth man on the field influencing the outcome,” said Dr. Robert P. Jones, PRRI CEO. “Significant numbers of American sports fans believe in invoking assistance from God on behalf of their favorite team, or believe the divine may be playing out its own purpose in the game.”

48% of those surveyed agreed that God rewards athletes who have faith, giving them good health and success.  More than one fifth of sports fans perform some sort of ritual they believe will provide their team with an edge.  More than a quarter said they prayed for the success of their team at some point.  Interestingly, more football fans turn to prayer than other sports fans: 33% as opposed to 21%.

“America’s football fans stand out from other fans in their belief in the supernatural, which may not be surprising after last year’s Blackout Bowl,” said Daniel Cox, PRRI’s Research Director, referring to last year’s power outage mid-game.

19% of those fans interviewed acknowledged God’s influence on the outcome.  More than half of those also said they prayed for their team.

Upon hearing the results of the survey, one Jewish educator and football fan explained, “God doesn’t care about football, God cares about people.”  He believes God determines the outcome of sporting events such as the Super Bowl for the greater influence it might have.  “One team’s win may create a job for someone, or put someone else in a better mood.”

Other Jewish educators talked about the positive influence professional sports have on their students’ spiritual lives. The Times of Israel spoke to Denver Academy of Torah head of school Rabbi Daniel Alter. He mentioned the 2007 World Series, in which the Colorado Rockies faced the Boston Red Sox. He said his students were more focused on prayer than ever before.

“That created a conversation on the role of prayer,” Alter said. “It brought up questions: Does God care? We probably will be having some of those conversations in the week leading up to the Super Bowl.”