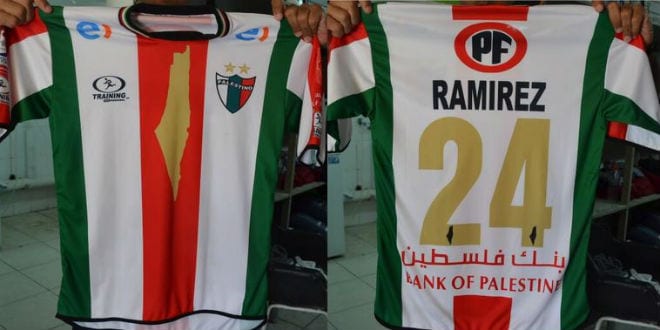 Chilean Soccer club Palestino was fined $1,300 for its new uniform, which consists of red, white and green tops with black shorts and socks, the colors of the Palestinian flag.  The element for which it was fined, however, was the number 1; on each uniform, the digit was replaced with a map of pre-1948 Palestine — what is now Israel.

Chile is home to the world’s largest Palestinian community outside the Middle East, with many of its members having arrived after Israel was declared a Jewish state.  Today, the community numbers some 350,000.  Club Deportivo Palestino was founded by Palestinian immigrants in Santiago, Chile in 1920.  The team won the Chilean championship in 1955 and 1978.

“The figure one was replaced by a map of the historic Palestine, before the United Nations resolution of November 20, 1947, which established a Jewish state and an Arab state,” said the complaint by Patrick Kiblisky, president of the Nublense Football Club, a rival team.  The formal complaint followed several public objections by various Jewish groups.  The implication of the map is that all of Israel, not just the areas conquered in 1967, are being claimed as Palestine.

In a six-page report, the league’s disciplinary tribunal said, “”This map, which does not take into account the present state of Israel, is a symbol for the Palestinian people. These circumstances mean that its use constitutes a political matter.”

“The association is removed from religious and political activities, in general, and anything else which does not have a direct relation to its objectives and to sport.  Consequently, the association prohibits any form of political, religious, sexual, ethnic or racial discrimination.”

The team is being fined the equivalent of $441 for each game in which the new uniforms were used.  The league also ordered the shirts to be redesigned.

“We will comply and pay the fine. We will not appeal,” Fernando Aguad, a Chilean Palestinian and president of Deportivo Palestino, told the EPE news agency.

Palestino FC made its views clear, however, with a statement on its Facebook page: “For us, free Palestine will always be historical Palestine, nothing less.”