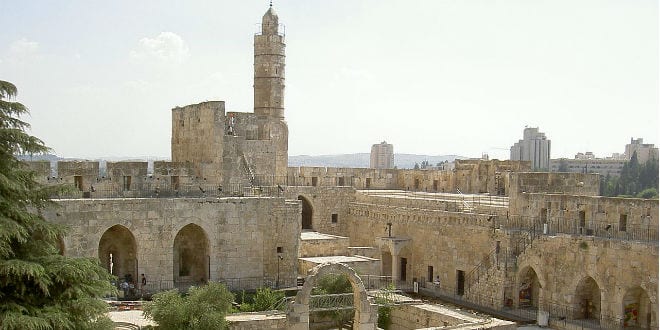 As the tallest structure in the Old City of Jerusalem, the Tower of David is a famous and familiar symbol to residents and tourists who pass through Jerusalem’s Jaffa Gate. The ancient citadel compound contains at least 2,000 years’ worth of history dating back to the First Temple period.

But the symbolic structure, among other historical structures across Israel, have some worried. There are six major cracks in the tower which raises questions if the structure would be able to survive an earthquake. Israel is located in a region extremely prone to earthquakes and a major quake could be devastating.

“A major earthquake poses a serious threat and needs to be treated as such,” Dr. Avi Shapira told Tazpit News Agency. As Chairman of Israel’s National Earthquake Preparedness Committee, Shapira explained that a large earthquake will affect every aspect of life as most Israelis live near active zones. “Israel is a small country – the consequences of a large earthquake will be far reaching.”

Therefore, Shapira believes that Israel has a duty to protect its national heritage sites. “We want to preserve the structures of our past and historical monuments of the Holy Land that are significant to the world.”

Earthquakes occur when a sudden release of energy in the Earth’s crust creates seismic waves, which then travel through the Earth’s layers.

In order to implement proper methods of protection and preparedness for earthquake threats, research and engineering is needed in order to upgrade ancient buildings according to Shapira.

Israel experienced five moderate earthquakes in October, which prompted experts to install a seismic monitoring system at the Tower of David in November 2013.

The Tower of David is the first heritage site that has been included in an international project that is monitoring fluctuations on a heritage site through a special monitoring system run by the University of Padova in Italy. This is the first attempt to use technology to determine the structural weaknesses in an ancient edifice in Israel.

Israel has been consulting with Italian researchers, who are leading experts in the field of earthquake evaluation and monitoring, in order to learn of new ways to minimize damage to cultural heritage sites through available technologies.

In a special conference at the Tower of David this week (January 19-20), called Seismic Risk Preparedness and Mitigation of Archaeological and Historical Sites, Italian experts were present to share their knowledge during unique sessions addressing earthquake monitoring.

Italy, located in a region with considerable seismic activity, has suffered from many major earthquakes in the past fifty years notes Claudio Modena, a Professor of Structural Engineering at the University of Padova. Professor Modena, who has visited Israel on many occasions, lead a session about strengthening existing cultural sites, this past Sunday, January 19.

“Italy is a world leader in the earthquake monitoring field and conducting research in methodology for effective dealing with earthquakes,” explains Professor Modena. “Israel is new to this area and we believe that sharing our knowledge will help maintain historical structures in the event of a major earthquake.”

Modena, who lives in Verona, Italy, has also investigated historical and archaeological sites in Akko, Tzfat, and Beit Shean.

Other experts at the Tower of David conference included representatives from the Italian Ministry of Cultural Heritage as well as the Ministry of Civil Protection in Italy, and the Firefighters Agency in Emergency Response.

Luka Ponticelli, an Italian fire officer, of the Central Direction for Prevention and Technical Safety in Rome told Tazpit that Italian fire services are trained to deal with the aftereffects of earthquake on historical sites and heritage monuments. “We are the only firemen in the world that are trained in restoring buildings and reducing damages following earthquakes.”

Following the conference at the Tower of David, Israel will continue to promote cooperation with academic institutions and earthquake experts in Italy.

“The Italian experience in dealing with earthquakes is of great help to those of us dealing with this threat in Israel,” said Professor Shapira.