Violence and Hatred: Palestinian Incitement Against Israel on the Rise According to New Report (Video)

Home » Violence and Hatred: Palestinian Incitement Against Israel on the Rise According to New Report (Video) 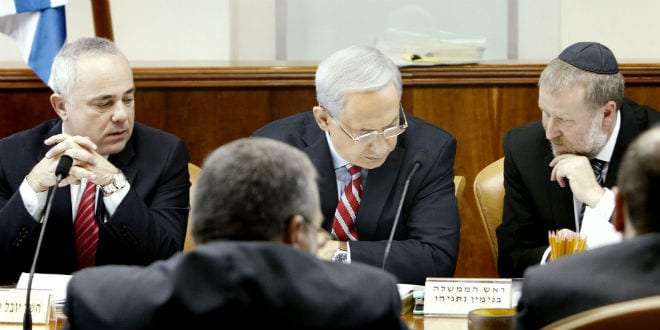 The Israeli Cabinet, at its weekly meeting, discussed the ongoing incitement and culture of hatred espoused by the Palestinian Authority (PA). The annual “Palestinian Incitement Index” was presented by Intelligence Affairs Minister Dr. Yuval Steinitz and the Director General of his ministry, Brig.-Gen. (ret.) Yossi Kuperwasser. The annual index has been presented to the Israeli cabinet since 2009.

The index presented findings regarding Palestinian incitement over the last year. The new findings also included examples of blatant incitement by the PA over the last couple of months when diplomatic negotiations began. Findings prove that not only during periods of negotiation does incitement increase, but the use of famous Nazi elements, such as images of Hitler, increases as well.

The PA, in their constant usage of these four main messages, is educating its people to hate and to openly attack and kill Jews and Israelis. In response to these findings, Minister Steinitz said, “We must not ignore the fact that the Palestinian educational system and media, under the patronage of Abu Mazen and during the negotiations, are educating and inciting – on a daily basis – for the destruction of the State of Israel.”

Prime Minister Benjamin Netanyahu has already stated his concerns regarding the PA as a true partner to peace. U.S. Secretary of State John Kerry, who has been brokering peace negotiations this last week between the PA and Israel, is aware of Israel’s concerns but has asked both sides to put down their differences. The release of the findings of the newest incitement index cannot bode well for future peace talks since it is clear that the PA has other goals in mind that conflict with peace. “I am compelled to point this out but we never lose hope of securing peace. On the other hand, we must not bury our heads in the sand like Ostriches. Peace is not just a piece of paper” commented Steinitz.

In commenting on the newly released index, Netanyahu said, “This is a very severe phenomenon. True peace cannot exist without stopping the incitement against Israel, and educating for peace. The refusal of the Palestinians to recognize Israel as the state of the Jewish People and declare the end of national demands – this is the root of the conflict.”

On the heels of another recently released report by the Shin Bet which shows that terrorism is on the rise in Israel, Steinitz linked the incitement with the new wave of terror: “I can say it appears that not only did incitement not stop in 2013, the last quarter saw an increase in the quantity of incitement in general and the explicit call for violence and terrorism against Israel and Israeli citizens in particular.” Netanyahu closed the meeting by making clear that Israel’s security is the main priority of the state when he stated “This is also the reason why we are insisting on significant security measures, so that we will be able to defend ourselves in any situation.”