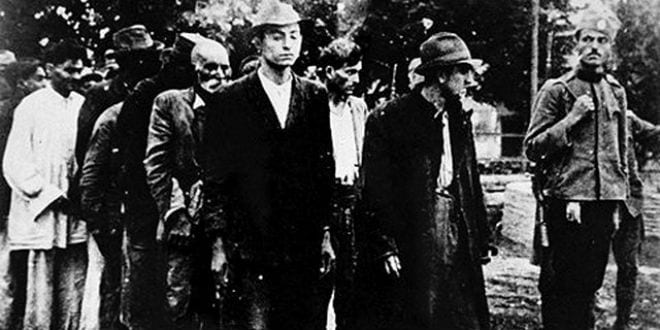 Many are familiar with Nazi Germany’s “Final Solution” to the “Jewish problem,” but the Jews were not the Nazis’ only victims.  Now, one group is seeking the assistance of Yad Vashem, Israel’s Holocaust Museum, to help preserve the memory of their people’s suffering.

The Roma, also known erroneously as Gypsies, were considered by the Germans to be inferior, as well as carriers of disease and genetic defects.  They, too, were forced to wear badges identifying themselves, though their badges were brown or black instead of yellow.  An estimated 220,000 Roma perished in the Holocaust, which their community calls Porajmos, or great devouring, though records are scarce and numbers imprecise.  Other reckonings put the total loss of life at 500,000.

The delegation at Yad Vashem, the first time nearly all delegates were themselves Roma, consisted of representatives from the  International School of Holocaust Studies from Slovakia.  “The Jews and Romanies had the same fate during the war,” the delegation’s leader, Erika Adamová, a former spokesperson for the deputy prime minister of Slovakia who serves today as the chairwoman of the center for the genocide of European Roma, told The Jerusalem Post.

“In the big ghettos, the Warsaw Ghetto and Łódź Ghetto, where Jews were mainly concentrated, there were also gypsies, as well as in the big concentration camps – Auschwitz, Treblinka, Chełmno and Sobibor. The Nazis destroyed you, and they destroyed us. But unlike us, you have a clear methodology for Holocaust education. We are still at the beginning of the road.

“We want to bring to Yad Vashem more Romani teachers, so that they can get to know the wider picture of the annihilation and gain a better understanding of the Porajmos, as we call the Romani Holocaust.”

The Romani day of remembrance falls on August 2, the anniversary of the day the Nazis destroyed the ‘gypsy camp’ at Auschwitz-Birkenau.

“Every year, on August 2…we hold a Romani day of remembrance,” says Irena Adamová, who works as a principal in a private high school in the city of Košice, where 60% of students are Romani and which teaches both the Holocaust of the Jews and the Porajmos. “In the latest ceremony, Israel‘s ambassador said that the Romani Holocaust was a forgotten holocaust. We are here to learn how to bring it back to people’s awareness.”

Another delegate, an English teacher whose grandfather never returned from the Nazi camps, explains, “In Slovakia there are monuments in memory of the Jews’ Holocaust, but until recently there were no monuments for the Romani Holocaust.  All these years the Slovak governments felt guilty, because Slovaks cooperated with the Nazis.”

The delegates went on to explain the importance of Porajmos education today.  “The situation in Slovakia is extremely difficult,” says Erika Adamová. “The radical Right is taking advantage of the economic situation in Europe to gain strength by renewing the old racism, against gypsies and against Jews. We dread the strengthening of the radical, almost neo-Nazi, parties, and that’s why we established the European center for Porajmos studies in Košice.”

“There is a phenomenon of anti-gypsyism in Europe, like anti-Semitism,” adds Irena Adamová. “Like he did for the Jews, Hitler created ghettos for Romanies. But while the Jews’ ghettos were taken apart a long time ago, the Romanies’ communities have yet to be destroyed. In these ghettos 10 people live in a room, children have no way of preparing their homework or getting ready for exams, which leads to poor achievements in their studies. As a result, children are expelled from elementary schools and placed in special schools for Romanies. It creates social backwardness.”

Romani history is an oral tradition.  It is believed the community first arrived in Europe some 700 years ago, from the region of Northern India.  The misnomer Gypsy grew out of the misconception that they originated in Egypt.  But in a modern world, oral history may not be enough.

“We have a commitment to preserve the memory for the future generations, in light of the Romani genocide and the Holocaust of the Jewish people,” says Rachel Bad Kaplan, who is in charge of the European Department at the International School of Holocaust Studies. “The seminar participants have joined an international network of thousands of education professionals who are working to guarantee that the memory of the Holocaust will be preserved.”