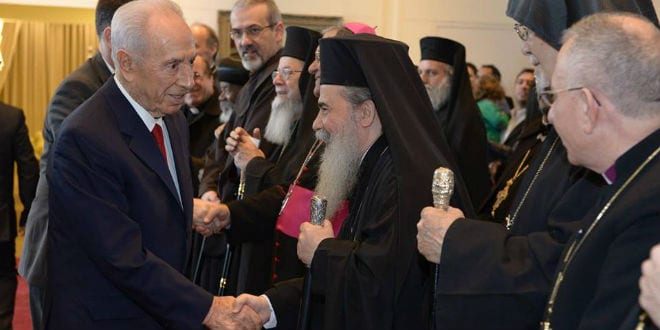 President Shimon Peres, along with Interior Minister Gideon Saar, hosted a New Year’s reception for the leaders of various Christian denominations in Israel at his Jerusalem residence.

Peres remarked upon various topics, including the recent price tag attacks against holy sites in Israel. He made clear that Israel would not stand for attacks on any type of holy site and maintained that “Israel has always been and will always remain committed to freedom of worship, freedom of religion.” In regards to accusations of Israel preventing worshipers from praying at holy sites, Peres remarked that Israel “will continue to guarantee access to holy sites for all.”

Touching upon the topic of extremist terror organizations, Peres condemned the recent terrorist attacks in Russia. The international community “must stand united against the dark movement of fanaticism across the world” and sent his thoughts and prayers to the families of the victims, wishing them a full and speedy recovery. Peres views these organizations as doing more harm than good and stated that “no one damages the life of the Middle East more than terrorists.”

The upcoming peace talks with the Palestinians, according to Peres, “can bring a change in the relations between Jews and Muslims and between all faiths.” He called for a two state solution and said “It is time for us and the Palestinians to move away from the language of enemies and opponents and embrace a dialogue of friendship and cooperation.”

In closing his remarks, Peres pointed to the message of tolerance and innovation espoused by Pope Francis I and his upcoming visit to Israel: “He is an outstanding example of a new spirit towards faith and prayer. He kept the old values but brought a new spirit of hope, of tolerance and of love.” Peres believes that inside of us there is a revolution taking place with a “renewed need to pray”. He wished for the upcoming new year “a year of peace, a year of hope.”

On behalf of Christian leaders, Greek Orthodox Patriarch His Beautitude Theophilos III addressed the reception. He also condemned the price tag crimes against religious leaders in Israel. “Those intolerable deeds that are directed against Holy Sites and cemeteries are not only intolerable deeds of desecration,” he continued, “they are unworthy of our  contemporary, technologically advanced society that seeks to be built on the principles  of mutual respect, freedom of worship and peaceful coexistence.” Remarking on access to holy sites, Theophilos III said “there is more that can be done, both to facilitate access to the Holy Places for pilgrims from a distance as well as from our local communities.” Theophilos III closed with a blessing, “that the light of this Holy Land may shine brightly in a dark world and give hope and life to all.”