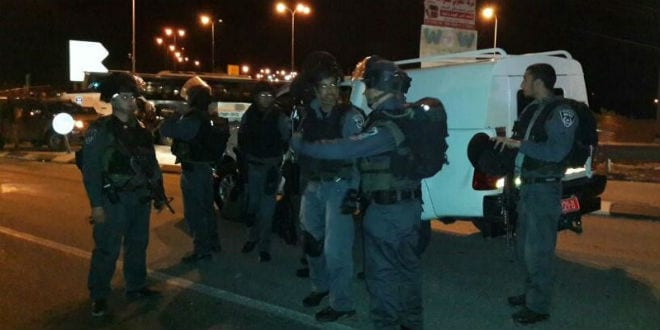 In what is being referred to as the third terror attack in as many days, sniper fire from Gaza severely injured a civilian Israeli defense worker who was repairing parts of the border fence Tuesday afternoon. The man, aged 22, was shot by a single bullet that entered his upper torso. He was rushed by helicopter to Soroka Hospital in Beer Sheva where he later died. Israeli Prime Minister Benjamin Netanyahu responded to the recent attack by stating “This is a very severe incident and we will not let it go unanswered. Our policy until now has been to act beforehand and to respond in force and this is how we will act regarding this incident as well.”

A second terror attack took place late Monday when an Israeli policeman was stabbed at Kikar Adam just north of Jerusalem.  The victim, a 41-year-old man, suffered moderate to serious wounds when he was stabbed in the back with a 6-inch knife.  The knife was left behind when the suspect fled under fire.

Security forces continue to search for the attacker, who is thought to have fled towards the nearby Palestinian village of Kfar Jaba.  The IDF Spokesperson’s Unit identified the attacker as Palestinian via Twitter.

The stabbing follows on the heels of an attempted bus bombing on Sunday in Bat Yam just south of Tel Aviv.  An alert passenger noticed something suspicious and the bus driver evacuated the passengers safely.  The bomb went off as police sappers arrived to defuse it.

“In a normal country, when a bus blows up on Sunday and a police officer is stabbed on Monday, you don’t release terrorists as a ‘gesture’ the next week,” he said.

Also in the wee hours between Sunday night and Monday morning, a rocket fired from the Hamas-controlled Gaza strip fell south of Ashkelon.  Nobody was hurt, but some damage was done.