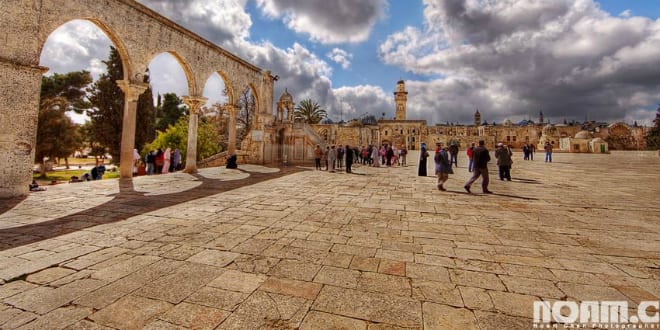 “And He said: ‘Take now thy son, thine only son, whom thou lovest, even Isaac, and get thee into the land of Moriah; and offer him there for a burnt-offering upon one of the mountains which I will tell thee of.’” (Genesis 22:2)

Jordan, which serves as custodian of Muslim holy sites within Israel, has demanded that Israel remove security cameras it alleges the country place on the Temple Mount on December 8.

“Jordan does not accept that Israel has set up a police station inside the compound. It is a flagrant military violation of the freedom of worshippers as well as an interference in the affairs of the Jordanian Islamic waqf [Islamic endowment],” he argued.

“Jordan will not stop efforts to prevent Israel from imposing a new status quo in Jerusalem,” Momani said.

The Temple Mount is a holy site to both Muslims and Jews, but following its capture from Jordan by Israel in 1967 in the Six-Day War, Israel handed administrative responsibility for the site to the Muslim Waqf.  Today, only Muslims can enter the site of the Al-Aqsa Mosque within the Temple Mount compound.  Jews and other tourists may visit parts of the compound at certain times of the day, but it is illegal for them to pray there.

The site has seen several violent outbursts lately, which often follow incitement from Muslim leaders during prayers.  In March, Israel arrested a Hamas-linked terror cell which carried out an attack there, and in September, a Fatah wing announced it, too, had plans for a terror attack in response to Jewish visits to the Mount.  Rocks have been thrown from the compound onto Jewish worshippers at the Western Wall below in the past, and the Second Intifada began with a riot following then Opposition leader Ariel Sharon’s visit to the site.

This demand follows reports in Arab media outlets claiming Israel is trying to take over the Temple Mount.  The Palestinian news agency Ma’an claimed this week that there was a recent infiltration of Jewish worshippers at the sanctuary revealed by both Muslims and Jews, and that Israel is digging under the Temple Mount in order to build a museum to commemorate the Jewish prayer area.

Israel and Jordan signed a peace treaty in 1994, and relations since, though generally calm, have been occasionally icy.  Last week, Jordan’s parliament adopted a bill stating that violence against Israel is not a terrorist act.