Tourism Numbers Up, Jerusalem Recognized by TripAdvisor as Choice Destination 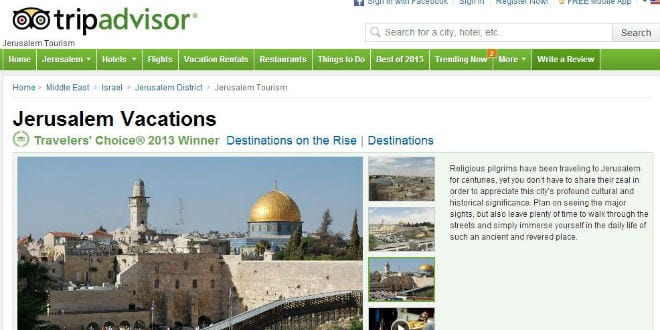 “At that time they shall call Jerusalem the throne of the LORD; and all the nations shall be gathered unto it, to the name of the LORD, to Jerusalem…” (Jeremiah 3:17)

After October 2013 saw an all-time record number of entries into the country, with 339,000 tourists entering in that month alone, November 2013 broke its own record for the most arrivals in that month, with 306,000 visitors arriving.  This is up 15% from November entries last year.  256,000 of last month’s visitors were classified as tourists, meaning they stayed more than one night.  Although the number of day visitors from Sinai is still down, due to unrest in Egypt, the difference in visitors since the year before is shrinking — while 90% fewer came from Sinai in August and September of 2013, the difference was only 41% in November.

In particular, the number of tourists arriving by air increased by 19%, to 220,000.  The rest arrived via land crossings from Jordan or Egypt.  Day visitors included 32,000 cruise passengers, 15,000 travellers at land crossings and 2,000 air travellers.

Since January, 3.3 million visitors have come to Israel, so perhaps TripAdvisor’s recognition is unsurprising.  The Travelers’ Choice Awards for Destinations on the Rise identifies the top 54 destinations that have seen the greatest increase in positive reviews from travellers over the year.

“For travelers looking for inspiration for their 2014 travel planning, TripAdvisor travelers have helped us put a spotlight on some amazing destinations that caught the eye of travelers this past year,” Barbara Messing, chief marketing officer for TripAdvisor said in a statement.

Tourism Minister Dr. Uzi Landau sees the numbers as a good sign.  In a statement, he said, “Tourists continue to arrive in Israel from all over the world in growing numbers and see Israel as a safe and attractive tourist destination. The tourists choose to stay in a variety of different accommodation options, allowing the income generated to be dispersed across all sections of the population; small and large businesses, in the cities and in the periphery, can make a decent living from incoming tourism – and so it should be. The Tourism Ministry welcomes the increase in tourism and will continue to work tirelessly to increase incoming tourism, including next year.”