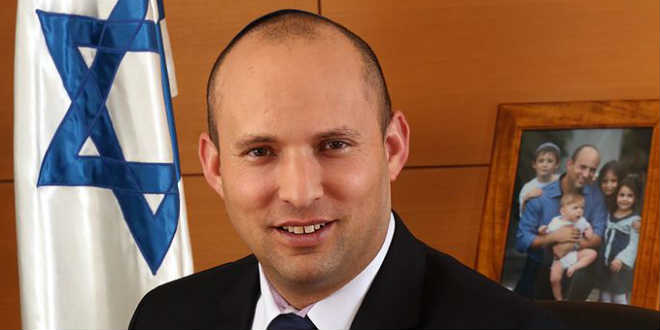 “Deceit is in the heart of them that devise evil; but to the counsellors of peace is joy.” (Proverbs 12:20)

Economy and Trade Minister Naftali Bennett expressed reservations regarding the upcoming round of talks with the Palestinians, saying a peace agreement that does not include Hamas is a “joke.”

“I’m for an agreement,” he told Israel Radio from Australia, where he is on an official visit, “but a real one that doesn’t harm our interests.”

Ongoing peace talks have been with Fatah, but Hamas, in power in Gaza, has not participated.  “Maybe I missed the news and Hamas in Gaza recognized Israel and stopped firing rockets,” Bennett said sarcastically.  In fact, three rockets were fired from Gaza towards Israeli targets just Saturday, although all fell short and landed within the strip.

He compared the exercise to buying a used car: “Imagine you’re negotiating over a car with someone who only owns half the car, and the owner of the other half says he won’t recognize any agreement you reach. You give him all the money but only get half the car.”

Bennett pointed out the history of failed peace agreements.  “[Former premier] Ehud Barak promised everything [to the Palestinians] and we got 1,000 dead. We were promised Gaza would turn into Singapore and we got thousands of rockets. The result of Oslo [peace agreements] was 1,500 dead. Not American dead, Israeli dead.”

His comments came in response to the optimism of President Barack Obama and Secretary of State John Kerry, speaking at the Brookings Institution’s Saban Forum in Washington over the weekend.

Obama told the gathering that he believed “it is possible over the next several months to arrive at a framework that does not address every single detail but gets us to the point where everybody recognizes it’s better to move forward than move backward.”

Bennett is not alone in his concerns for the process.

“To speak frankly,” Foreign Minister Avigdor Liberman said Friday night, also at the Saban Forum, “I don’t believe it is possible in the next year to achieve [a] comprehensive solution, to achieve some breakthrough, but I think it’s crucial to keep our dialogue, because we live in the same region, we’re neighbors. It’s important at least to think about coexistence.”

Meanwhile, Defense Minister Moshe Ya’alon said Saturday night at a conference in Tel Aviv, “As someone who supported the Oslo Accords, I’m learning that we have no partner on the other side.

“On the other side, there isn’t, and hasn’t been since the dawn of Zionism, a leadership that’s willing to recognize our right to exist as the nation-state of the Jewish people, and to see in an agreement an end to the conflict and an end to all demands. We won’t talk about an inch, a millimeter of land so long as we don’t see that we have a partner that’s talking about recognition, about the end of the conflict and the end of the right of return.”