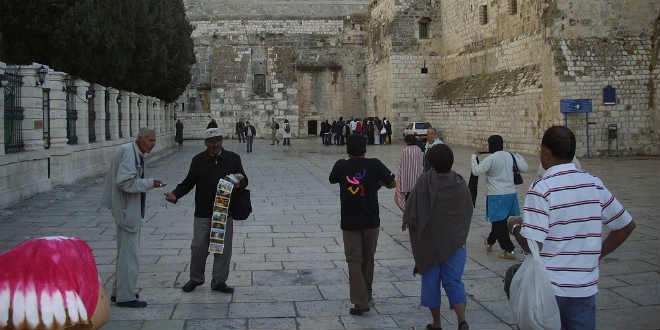 “Will two walk together, except they have agreed?” (Amos 3:3)

Israel’s tourism ministry is working in cooperation with the Church and other bodies to prepare for the holiday rush.  Tens of thousands of Christians are expected to arrive in Israel for the Christmas season, and the ministry is busy preparing Christian holy sites for the onslaught of visitors.

The ministry has invested NIS 86 million ($24 million US) over the past two years to maintain and improve the infrastructure of Christian holy sites.  Tourism minister Uzi Landau plans to host pre-Christmas receptions for Church leaders in Jerusalem and Nazareth, as well as providing free shuttles between Jerusalem and Bethlehem on Christmas itself.

In a press release, Landau said, “The Tourism Ministry under my leadership will continue to invest significantly in the preservation and renovation of Christian holy sites. Since its establishment, the State of Israel has attached great importance to values of freedom of religion and worship and works tirelessly to facilitate religious practice for people of all religions in freedom and mutual respect. We will do all we can to ensure that every Christian can visit the holy sites. We  invite the faithful to visit the Holy Land and experience a powerful religious and spiritual pilgrimage in Jerusalem, the Galilee and beyond.”

Christian tourism represents just over half of the country’s overall visitors.  30% of visitors defined themselves as “pilgrims”.  These tourists arrive from countries such as Italy, Spain, Germany, Austria, Poland, Mexico (mainly Catholics); Russia and  Romania (mainly Orthodox); and Nigeria (Catholics and Protestants).  Most stay about a week and visit holy sites such as the Church of the Holy Sepulchre and the Western Wall in Jerusalem, Capernaum and the Yardenit baptism site.  Other places of interest include Tiberias and the Galilee region, the Dead Sea, Nazareth and Bethlehem.

75,000 visitors are expected for the Christmas season, including 25,000 pilgrims.  For their benefit, buses will run from Mar Elias Monastery in Jerusalem to the Church of the Nativity in Bethlehem, from noon December 24 to noon December 25.  Ministry representatives will be stationed at Rachel’s Crossing to greet visitors and hand out welcome packages which will include coasters decorated with scenes from Israel and chocolates for the holiday.  Work has been done at numerous holy sites, including the baptism site at Qasr el Yahud near the Dead Sea, Mount Zion and Ein Karem in Jerusalem, and the Gospel Trail in the Galilee. Other projects include the boardwalk from Tiberias to Capernaum, Korazim and Mount Precipice.

Pre-Christmas receptions and events include the lighting of the Christmas tree and opening of the traditional Christmas market in Nazareth, December 11-15; the annual reception for Church leaders in Nazareth December 22, hosted by Minister Landau; and a similar reception December 23 in Jerusalem.  Also participating in the receptions alongside the Christian leaders will be the Director-General of the Tourism Ministry Amir Halevi, and representatives of the Church, government and private bodies involved in promoting Christian tourism to the Holy Land. The minister will send season’s greetings for Christmas to the Christian communities and invite the faithful around the world to make a pilgrimage to the Holy Land.  Christmas eve will see the traditional parade of thousands of local youth, together with the leaders of the Christian communities, passing through Nazareth. The parade ends at the plaza in front of the Basilica with a firework display, sponsored by the Tourism Ministry, to announce the opening of the festive Christmas celebrations. Christmas Mass will be celebrated in the Basilica of the Annunciation.

As part of the ongoing activities to promote pilgrimage to the Holy Land, Landau and the representatives of the Tourism Ministry in Israel and around the world meet regularly with Church leaders and communities. The Tourism Minister  met recently with both His Beatitude, the Latin Patriarch of Jerusalem Fouad Tual and His Beatitude, the Greek Orthodox Patriarch Theophilos III in order to discuss matters important to the Church and future collaboration.

Representatives in the Tourism Ministry are anticipating continued collaboration with the Church for the visit of Pope Francis, who is expected to visit the Holy Land in the first half of 2014. The Tourism Ministry invested over  NIS 3.5 million in infrastructure and marketing the recent International Day of Faith celebrations held at Mount Precipice in Nazareth (17.11.13), led by the Latin Patriarch and attended by about 7,000 Catholic faithful from the region and overseas.

The ministry runs dedicated websites and facebook pages for the Catholic and Evangelical communities.