Rabbi: The Pope Says Has ‘Total’ Commitment To Jewish People 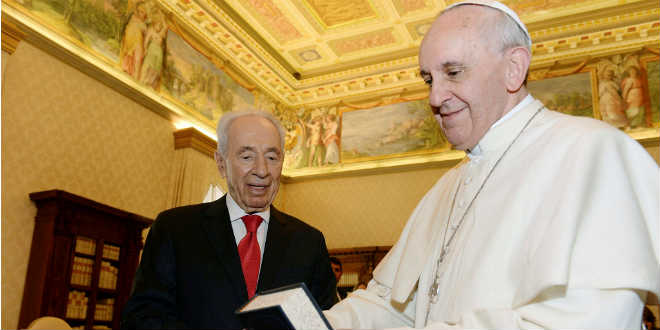 There are friends that one hath to his own hurt; but there is a friend that sticketh closer than a brother (Proverbs 18:24)

According to Rabbi Abraham Skorka, rector of the Seminario Rabinico Latinoamericano in Buenos Aires and close friend of Pope Francis, the Christian leader’s “commitment with the Jewish people is total,” according to The Times of Israel.

Skorka tells a story in which he was traveling towards the end of September, when many of the Jewish holidays fall out, and was in need of Kosher wine. Skorka notes that he was lucky enough to have a friend who had connections to a hotel and could arrange for Kosher meals. The hotel, he explains, is in the Vatican and his friend was the pope.

“He invited me to share his table for the three daily meals. He told me, ‘You have to sit here’ — to sit on his right,” Skorka said in a recent interview in New York. “I said, ‘Look, I have to say Kiddush.’ I had to say the special blessing for the holiday, for Shabbat, before the meal is served. He told me, ‘Do what you have to do.’”

“There is overall a very deep respect for the other,” Skorka said.

Skorka said the pope is so comfortable with Jewish culture that as he vetted meals at the Vatican hotel to make sure the rabbi was given only kosher food, Francis joked he was the rabbi’s personal “mashgiach,” the Hebrew word for a supervisor in a restaurant or other business who oversees compliance with Jewish dietary laws.

When Francis was Cardinal Jorge Bergoglio, archbishop of Buenos Aires, he and Skorka co-wrote a book of dialogues on Judaism and Roman Catholicism titled, “On Heaven and Earth,” had a similarly themed TV show called “Bible, A Dialogue for Today,” and offered prayers from each other’s pulpits.

“When he speaks about evangelization, the idea is to evangelize Christians or Catholics,” to reach “higher dimensions of faith” and a deepened commitment to social justice, Skorka said. “This is the idea of evangelization that Bergoglio is stressing — not to evangelize Jews. This he told me, on several opportunities.”

Skorka said the two men plan to see each other again in January, when Francis is scheduled to meet in Rome with Argentine Jewish leaders. And the rabbi hopes to accompany the pontiff if he travels to Israel next year, a trip that is under consideration.

Skorka said he hopes to pray with the pope before Jerusalem’s Western Wall, the holiest place where Jews can pray, and in Bethlehem, “to show the world it is possible.”