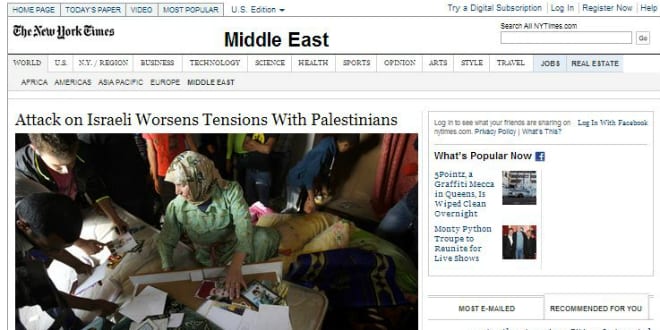 The lip of truth shall be established for ever; but a lying tongue is but for a moment. (Proverbs 12:19) In a blog post published on Tuesday, New York Times public editor Margaret Sullivan apologized  for making a “poor choice” when it came to printing an “emotional and sympathetic” picture for the story of murdered Israeli soldier Edan Atias, according to the Jerusalem Post.

Atias, 19, was attacked on a bus on November 13, an attack that The New York Times said would “further [cloud] a peace process that was already severely strained.”

At the head of the article was a large picture of Silwa Gawadreh, the mother of the Palestinian teenager who is accused of Atias’s murder, surrounded by family members and photographs of her son. In the print edition of the paper, a picture of the bus where the attack took place was placed under that of Gawadreh. Online, the picture of the bus appears small on one side and Gawadreh’s photo stands alone at the top of the page. No pictures of Atias or his family accompany the article.

Addressing the hundreds letters of complaint that she received, Sullivan wrote that the image was powerful, but “a poor choice, failing to put the focus where it belonged.”

Sullivan wrote that she spoke on Monday with two other Times editors, all of whom agreed it was a “regrettable choice.”

“The dominant image with an article should reflect the overall point of the article and the reason for its newsworthiness,” she wrote.

“The selection of the Palestinian mother’s image with the article was an effort to achieve balance, but such an effort was not appropriate in this case,” editor Michele McNally told Sullivan, and said that photographs of the soldier’s funeral were not available until later in the news cycle.

“We should have waited for that or substituted it once it came,” she said.

Foreign editor Joseph Kahn said that while the Times tries to represent the Israeli-Palestinian conflict accurately and fairly, “we don’t always get it right.”

As of this writing, Gawadreh’s photo is still the dominant picture on the online article.