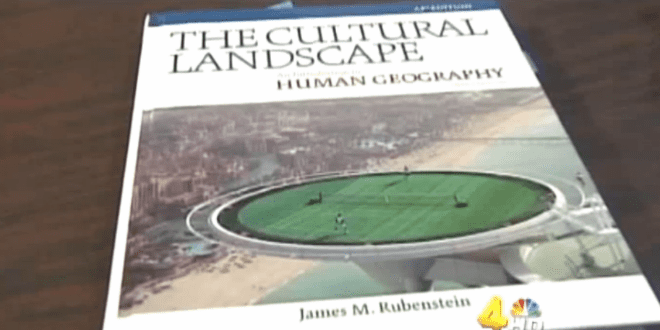 “Keep thy tongue from evil, and thy lips from speaking guile.” (Psalms 34:13)

Since the summer, parents in Tennessee’s Williamson and Rutherford counties have been fighting to have controversial textbooks removed from their children’s classrooms.  Last month, the parents asked commissioners to suspend the textbook approval process entirely until the Senate Education Committee meets in November to address anti-Judeo/Christian values in certain textbooks.  At the heart of the matter is Prentice Hall’s The Cultural Landscape: An Introduction to Human Geography 11th Edition.  Prentice Hall is owned by Pearson Publishing.

Leading the charge for the parents is Laurie Cardoza Moore, president of Proclaiming Justice to the Nations, who initiated the request for the book’s removal.  “Pearson misled Williamson County School Board Members and parents in June when they stated that the anti-Semitic quote that Williamson County parents objected to would be removed from online and 11th & 12th editions,” she said.  In August, the quote was simply moved to another page in the text.  After last month’s hearing, however, Pearson provided the final print of the textbook, without the offending quote.

The quote in question encourages students to consider whether terrorism might be a subjective classification.  As an example, the book offered, “[I]f a Palestinian suicide bomber kills several dozen Israeli teenagers in a Jerusalem restaurant, is that an act of terrorism or wartime retaliation against Israeli government policies and army actions? Competing arguments are made: Israel’s sympathizers denounce the act as a terrorist threat to the country’s existence, whereas advocates of the Palestinian cause argue that long-standing injustices and Israeli army attacks on ordinary Palestinian civilians provoked the act.”

This is only one of several statements parents in the county have objected to.  Other statements in the text are misleading or outright false, including a misrepresentation of mainstream Christian religious beliefs regarding man, nature and the human relationship with God.

PJTN also brought attention to the troubling employment of Shabbir Mansuri of the Council of Islamic Education (CIE) as a consultant for content oversight.  Mansuri is on record as having said that he is “waging a ‘bloodless’ revolution, promoting world cultures and faiths in America’s classroom,” while the CIE “has warned scholars and public officials who do not sympathize with its requests that they will be perceived as racists, reactionaries, and enemies of Islam,” Cardoza Moore noted.

Williamson and Rutherford parents are not alone in protesting materials from this and other publishing houses.  Pearson already agreed to reprint and replace, at its own expense, a World History textbook for Palm Beach County in Florida.  Meanwhile, parents in Volusia County, also in Florida, failed to have the book removed from their children’s classrooms this week.  The parents complain that the book “whitewashes” the history of Islam and its Muslim followers, including involvement in the 9/11 terrorist attacks and the shootings at Fort Hood, Texas, the Daytona Beach News-Journal reported.

Pearson is one of the world’s largest producers of educational materials and owns several smaller publishing companies in addition to Prentice Hall.