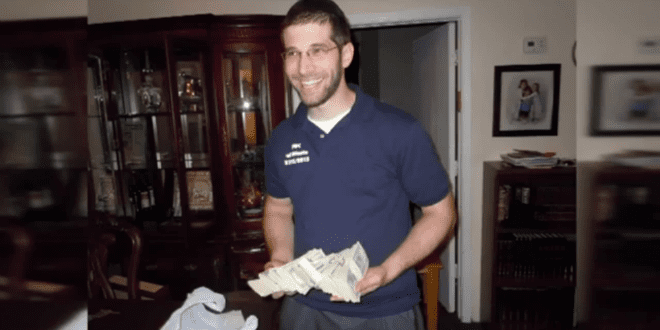 Treasures of wickedness profit nothing; but righteousness delivereth from death. (Proverbs 10:2)

When the yeshiva teacher got the desk into his house he was dismayed to find that it did not fit through the doorway of his new study. “It missed being able to pass through the door by a quarter of an inch. It was so frustrating!” Muroff recalled. With no other option, Muroff, his wife and a  friend began to take the desk apart piece by piece. After removing one of the file cabinet’s doors a plastic bag fell to the floor.“I thought I saw a bill, and I guessed there was maybe something like $100 in it,” the rabbi said.

The Rabbi’s estimation proved to be far off. By the end of the counting the Muroffs had discovered that there was $98,000 in the bag. Muroff said the notion of keeping the loot never occurred to him. “We knew we had to return the money. There was no question it was the right thing to do,” he said.

He remembered that the woman who sold him the desk had told him that she had bought it from Staples and put it together herself a few years ago. This convinced the rabbi that the money must have belonged to her.

Indeed, the woman did say the cash was hers — an inheritance from her recently deceased parents that she, because of emotional distress, had stashed in the desk rather than depositing it in a bank account. Having recalled that she had hidden the money in the desk, she was upset when she could not find it there. She looked for it all over her house, but to no avail, not realizing that the bag had slipped down behind the drawers.

“A lot of people are cynical and have asked me why I didn’t call the police and why I immediately believed that the money belonged to the lady,” Muroff said.

“The lady looked totally honest and nothing smelled funny about the situation,” he explained. The rabbi also didn’t ask the woman too many questions about her unorthodox financial practices. “It’s not our money and it’s not our business,” he suggested.

The Rabbi originally tried to keep the story quiet but eventually relented in the name of education. “I decided upon the advice of some prominent rabbis to take it to the news,” he explained. “It’s a good story and we’re making a big kiddush hashem (sanctification of the name of God) by telling it.”