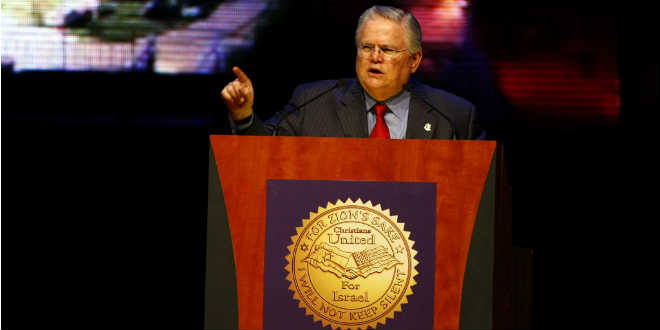 With more than 1.6 million members, Pastor John Hagee’s Christians United For Israel (CUFI) has become a powerful force in pro-Israel advocacy in American politics. Additionally, his humanitarian work—including the donation of more than $80 million to Israeli charities—has earned him growing praise from the Jewish community.

But despite the efforts of Hagee, who is arguably the face of Christian Zionism today, many Jews remain skeptical of Evangelical support for Israel. That phenomenon can be understood against the backdrop of Christian Zionism’s history of embracing competing theological and political ideologies, a trend that persists today.

Deeply rooted in the Christian faith, especially Protestantism, Christian Zionism emerged in the U.S. and Great Britain in the 19th century, when leaders such as Lord Shaftesbury and William Eugene Blackstone helped shape the movement’s policies in their respective countries. More modern Christian leaders like Winston Churchill and Harry Truman, working with Jewish friends, set the course for their governments’ support for and recognition of the modern state of Israel. Hagee seeks to continue that legacy.

“Before CUFI there was nothing to give American Evangelicals a national voice for Israel,” Hagee told JNS.org in an exclusive sit-down interview on the eve of a major dinner with Jewish leaders in his honor on Nov. 7 in New York.

While Hagee has been a staunch supporter of Israel since the early 1980s, when he first organized the now famous “Night to Honor Israel” at his Cornerstone megachurch in San Antonio, CUFI—founded in 2006—has arguably become his most powerful tool in support of Israel.

“Our main and initial objective was to get thousands of leaders to go each year to Washington, D.C. to engage every senator and congressperson as to why we as Evangelicals support Israel,” Hagee said.

It wasn’t always easy to garner Christian support for Israel. For most of Christian history, the teaching of replacement theology—which argues that the Christian church has replaced Israel and the Jewish people regarding the plan, purpose and promises of God—has been a dominant teaching.

Hagee initially faced pushback from other Christians regarding his ministry’s support for Israel—his Cornerstone Church in San Antonio, as well as his family, was threatened by violence that included bomb threats and smashed windows.

“Israel has always had its enemies. When I first started supporting Israel over 30 years ago, I was using the TV platform to preach against the doctrine of replacement theology, which was was all the rage then,” he said.

Despite CUFI’s growth—it calls itself America’s largest pro-Israel group—Christian Zionists today still face significant threats from anti-Zionist Christians, who use their faith to accost Israel over its policies towards the Palestinians. The anti-Zionist movement is based in the Bethlehem Bible Church, an Evangelical church in the West Bank, which hosts the “Christ at Checkpoint” conference, gathering Evangelical leaders to criticize Israel and promote Boycott, Divestment and Sanctions against the Jewish state

“From time to time, groups organize for purposes that are anti-Semitic and anti-Israel. You can’t divorce the two. You can call it your theology, but it’s anti-Semitism within a theological umbrella. I place all these people in the category of anti-Semites with a new flag to fly,” he said.

Christian Zionism has also faced resistance in its efforts to be accepted by the Jewish community. Hagee admitted that it is only natural for some Jews to be skeptical of Christians due to the long history of Christian anti-Semitism, as evidenced during the Crusades, Inquisition, and Holocaust.

“I think there are Jewish people who have what my rabbi friend Rabbi Aryeh Scheinberg (an Orthodox rabbi in San Antonio) says is a ‘2000-year knee flinch’ of their skepticism of the Christian agenda,” Hagee said.

“The Jewish people are very aware of history and it will take just more than a few Christians singing kumbaya to change their mind,” he said.

Aside from history, there are significant political, geographical, and cultural differences between Evangelicals and Jews that bolster Jewish suspicions of Evangelicals. According to the Pew Research Center, Evangelical and Born-Again Christians voted overwhelmingly—79 percent—for Republican candidate Mitt Romney in the 2012 presidential election, while Jews voted overwhelmingly in the other direction—69 percent—for President Barack Obama. Additionally, Pew says most Jews tend to live in heavily urbanized regions in the Northeast like New York, New Jersey, and Massachusetts, while Evangelicals are most heavily concentrated in southern states like Tennessee, Texas, and Oklahoma.

Former White House Press Secretary Ari Fleischer, however, breaks the mold of Jewish Americans. He was born and raised in New York and is a conservative who has worked in the south for many years for and with Evangelical Christians, including former President George W. Bush.

Fleischer, a close friend of Hagee who was master of ceremonies at the Nov. 7 dinner, told JNS.org that his Jewish friends constantly express their skepticism of Evangelicals.

“Just like any bigotry, if you don’t know somebody you are inclined to stereotype them. As soon as you get to know them, it starts to break down. This is true in both directions; I’ve seen conservatives make false judgments [about people] who they may not know, just like liberals, Jews and anybody else who are not aware of the Evangelical community,” Fleischer told JNS.org.

“All the years I’ve spent with Evangelicals, I never once had anybody trying to convince me of anything or make me think differently about my beliefs,” Fleischer said.

Hagee understands Jewish skepticism of Evangelicals, but hopes Jews can also be open-minded.

“They have a historical right to be skeptical, [but] all I ask for is the opportunity to present my message,” he said.

Regardless of any Jewish debates over Christian Zionism, it was clear at the dinner in Hagee’s honor that the pastor and CUFI are well respected in the eyes of prominent mainstream Jewish leaders.

“I’ve had a long relationship with [Hagee] and I participated in his Washington conferences and his ‘Night to Honor Israel;’ it is a remarkable experience that everybody should have. He cares deeply about Israel. And his audiences are very passionate and committed. I deeply respect Pastor Hagee, he does not have alternative agendas and is very committed to Israel’s vitality and survival,” said Malcolm Hoenlein, executive vice chairman of the Conference of Presidents of Major American Jewish Organizations, who presented Hagee with a lifetime achievement award at the dinner.

Hoenlein gave his take on Jewish skepticism of Evangelicals in an interview with JNS.org.

“First of all, you evaluate each partner on an individual basis, and there are certainly some with legitimate suspicions. However, that is not true with Pastor Hagee and CUFI. While he does have his religious beliefs, he does not impose them on you and he is very respectful of your faith,” he said.

“We need the Evangelical community… I would ask people to embrace their true friends and, as to those who engage in questionable practices, we should isolate them,” he added.

“We’re thrilled that he’s been a real pro-Israel leader for decades. Our belief is that is it very important that support for Israel, which is already strong among Jewish Americans, also extend beyond the Jewish people to include Christians and many others,” Kassen told JNS.org.

Israeli Prime Minister Benjamin Netanyahu, addressing the dinner in a video message, spoke about his long friendship with Hagee. Nobel Laureate and noted Holocaust survivor Elie Wiesel, sitting next to Hagee, lamented that if there were more gentiles like him, history might have turned out differently. In a video message, News Corporation CEO and Chairman Rupert Murdoch praised Hagee for standing up for democracy and freedom.

Hagee told JNS.org that he has enjoyed a warm relationship with many Jewish leaders over the years, including every single Israeli prime minister since Menachem Begin.

“Begin was a great Biblical scholar and held Bible teaching every Friday night, which he invited me to. Each time I met with him it was a very enjoyable opportunity as friends to share common principles of faith that bound us together. That has never really changed, from when I met Begin to Netanyahu today,” Hagee said.

Hagee is hopeful that his church and CUFI will continue to flourish.

“I hope that the next generation [of CUFI advocates] will rise up to be aggressive and intelligent leaders that will continue its work until all the enemies of Israel are defeated,” he said.