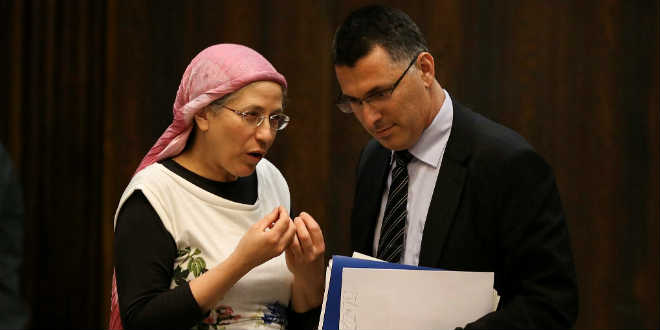 This is thy lot, the portion measured unto thee from Me, saith the LORD; because thou hast forgotten Me, and trusted in falsehood. (Jeremiah 13:25)

Israeli Knesset Member Orit Struck of Bayit Hayehudi (Jewish Home) hammered US Secretary of State John Kerry on Friday for not being a fair negotiator, according to the Jerusalem Post. Struck is the latest in a growing number of Israeli lawmakers from the new right-wing party to compose letters of discontent to Kerry.

Struck’s letter came after Channel 2 News interviewed Kerry Thursday, and the lawmaker summarized his comments as “threatening Israel with a third Intifada if it refuses to capitulate to [his] demands and those of the Palestinians and remove its soldiers from the areas of Judea and Samaria.”

What Kerry told Channel 2’s Udi Segal is: “The alternative to getting back to the talks is the potential of chaos. Does Israel want a third intifada?”

The Bayit Yehudi MK thanked Kerry in her letter, saying his words “finally and most strikingly revealed the extent to which you cannot serve as an honest broker.”

“Whose side are you on, Mr. Secretary? On the side of terrorists who are waging an Intifada against women and children? Or on the side of the soldiers who are saving human lives?” she asked.

According to Struck, “the Intifada is already here.” She recounted her bus ride from Jerusalem to her home in Hebron on Monday, during which the bus was ambushed by Palestinian terrorists throwing Molotov cocktails.

“This serious incident is not an isolated one, but rather one in a series of many similar events that have been occurring in recent weeks on a daily basis throughout Judea and Samaria, especially in wake of the release of terrorists carried out as part of the agreement you brokered,” Struck wrote.

Struck also explained that it would be irresponsible to remove the IDF from the West Bank, because the Second Intifada was only curbed by Operation Defensive Shield, in which soldiers were returned to the area.

In addition, Struck pointed out that the area Kerry refers to as a future Palestinian state is “Israel’s historic homeland,” which includes Hebron, her residence and “the city of Abraham and King David and the Cave of the Patriarchs [that] was purchased by the father of our nation for his descendants after him. Beit El, Shiloh and Efrat are all noted in the Bible as Jewish towns, and when we returned to them after 2,000 years of exile, we were returning home.”

She added that Jews lived in these places centuries before the advent of Christianity and over a millennium before the birth of Islam.

Finally, Struck wrote, “we are not frightened by your threats…Your threats will not have the outcome that you intend, but they have already proved very effective in revealing exactly how unsuited you are to serve as an honest broker.”

The party’s MKs continued criticizing the US Secretary of State since then, with Shaked writing on Friday that Kerry’s “equation that a lack of a treaty with the Palestinians equals a third Intifada and international isolation of Israel” is baseless.

MK Motti Yogev (Bayit Yehudi) said “Kerry’s threats to the people and State of Israel crossed every line and expressed almost the exact stance of the Palestinian Authority as his own.”