Thousands of Ethiopians Flock to Jerusalem To Celebrate Return to Israel 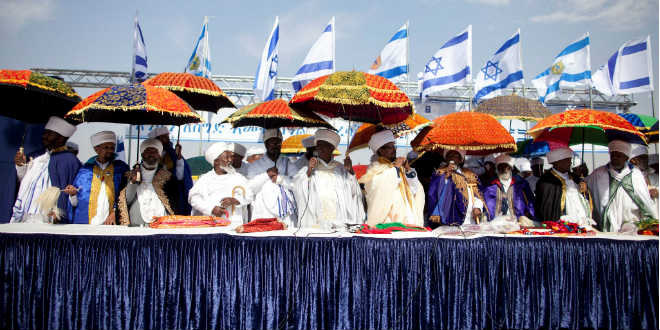 And there is hope for thy future, saith the LORD; and thy children shall return to their own border. (Jeremiah 31:16)

Thousands of Ethiopians gathered in Jerusalem on Thursday to celebrate the holiday of Sigd, a holiday observed 50 days after Yom Kippur focusing on repentance, praying for a return to Zion, the coming of the Messiah and the building of the Third Temple.

Sigd  has been celebrated for the past 2,500 years by Jews living in Ethiopia, according to the Jerusalem Post. Since their mass exodus to Israel in the 1980s and 90s the holiday has been celebrated in the capital of the Holy Land annually. Israel officially designated Sigd a national holiday in 2009.

“Today is important because this holiday began in Ethiopia a long time ago,” said Tamir Sanbatao, 32, of Petah Tikva, who immigrated with eight family members during Operation Moses in 1984.

“In Ethiopia we fasted the entire day and climbed a local mountain to pray for forgiveness and deliverance to Jerusalem. Now that we’re here we pray the Messiah will come and that a third Temple will be built,” he said.

“Even though we’re celebrating today,: he explained, “we’re still waiting and praying for this day to come.”

The Ethiopian mass exodus to Israel began during the Marxist-Leninist dictatorship of Mengistu Haile Mariam, who murdered thousands of African Jews, separated families, displaced survivors, orphaned children and forbade all from practicing Judaism. This oppression – compounded by unparalleled famine, the highest infant mortality rate in the world and the constant threat of war – resulted in an untenable existence for the country’s tens of thousands of Jews.