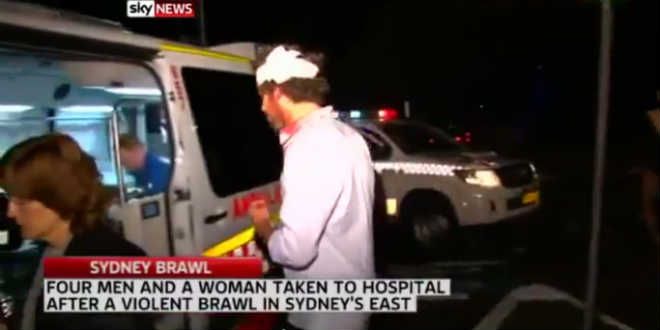 And the Amorites, that dwell in that hill-country, came out against you, and chased you, as bees do, and beat you down in Seir, even unto Hormah. (Deuteronomy 1:44)

Five Australian Jews on their way home from Shabbat services Saturday morning were injured after being attacked by a large group of men in Bondi, Australia. Bondi is a suburb of Sydney, according to the Jerusalem Post.

According to The Times of Israel, eight young men set upon the victims – four men and a 62-year-old woman – and injured all of them in a brawl after yelling “derogatory comments,” New South Wales police said. “Some [of the victims] have suffered concussion – there’s also a fractured cheekbone, a possible broken nose, lacerations and bruising,” NSW police told ABC News.

Employees of a nearby hotel eventually restrained three of the attackers, who have now been charged in connection to the attack.

“There’s been severe racial vilification here, that’s a term under the legislation, and I think we should look at taking action,” Stepan Kerkyasharian, president of the NSW Anti-Discrimination Board, told Australian media.

The Anti-Discrimination Board, a government body, promised an investigation into the incident.

“Violence of this kind and, in particular, racist violence, anti-Semitic violence, is completely unacceptable in our society,” Communications Minister Malcolm Turnbull was quoted by The Australian as telling the Nine Network following the attack, which occurred as the victims were on their way home from synagogue.

David Faktor, a spokesman for St. Vincent’s Hospital, where the victims were treated, expressed consternation at the attack, telling ABC News that “maybe in Germany in the 1930s and Russia in the 1970s but, certainly in Sydney, Australia, Bondi, you just don’t expect an unprovoked attack.”