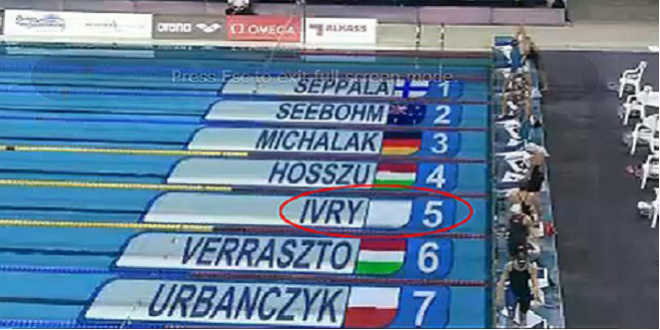 Go through, go through the gates, clear ye the way of the people; cast up, cast up the highway, gather out the stones; lift up an ensign over the peoples. (Isaiah 62:10)

The Israeli national swim team began its winter season with two competitions in the Persian Gulf last week. The team from the Jewish State has done well at the competitions, held in Doha and Qatar, thus far, even breaking a number of records. However, event organizers have refused to show the Israeli flag, showing it as completely white, according to Ynet.

Last Monday evening, the second day of the FINA Swimming World Cup 2013 in Doha, the Israeli flag disappeared from the live broadcast from Qatar on several occasions. Instead, a colorless flag was displayed alongside the names of the Israeli swimmers.

In a Facebook status he wrote two days ago, Israeli swimmer Gal Nevo described the swimmers battle to be recognized as Israelis.

“Three years ago we arrived in Dubai, for the world championship, and were surprised to discover that despite the image of an advanced emirate, it is a Muslim country which refuses to recognize Israel.

“The name Israel was not mentioned, throughout the competition we were presented as ISR swimmers, and the editors of the television broadcast were instructed to do everything in their power to remove us and our flag from the frame.

“Several days ago we arrived here for the second time, this time for the World Cup, and at the beginning of the competition it seemed like a rerun – one again ISR instead of Israel, and once again the television is excluding us from any possible frame.

Nevo added that at least in Dubai there appeared to be an improvement over time. “In the first finals we were still the ISR team. Somewhere during our four finals and Amit [Ivry’s] medal we finally became the Israel team. For the very first time, our name is mentioned in Dubai. A small record has been broken.”

On the last day, he said, the swimmers were finally shown with a flag of Israel “on the hat, on the shirt, in the pool and on the scoreboard. It’s hard to describe how something which seems almost ordinary everywhere else feels like a huge victory here.”