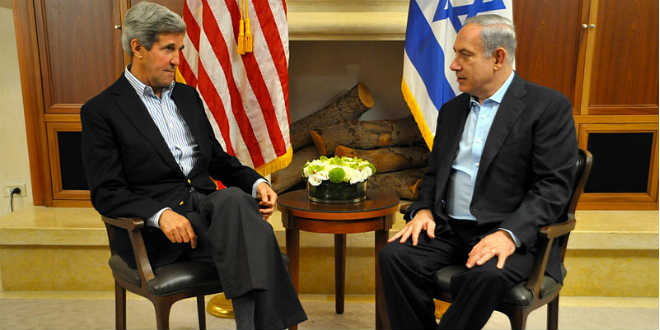 The words of a wise man’s mouth are gracious; but the lips of a fool will swallow up himself. The beginning of the words of his mouth is foolishness; and the end of his talk is grievous madness. A fool also multiplieth words; yet man knoweth not what shall be; and that which shall be after him, who can tell him? (Ecclesiastes 10:12-14)

Returning from a two-day trip to Rome on which he met with US Secretary of State John Kerry, Israeli Prime Minister Benjamin Netanyahu told reporters that he was unimpressed with the American plan to negotiate with Iran over their nuclear program, according to The Times of Israel.

Netanyahu and Kerry had held a marathon meeting on Wednesday evening. Prior to the sit-down Kerry reportedly, apparently seeking to allay Israeli fears, said Iran would have to prove to the world that its nuclear program was not military in nature.The prime minister was apparently unpersuaded by Kerry’s attempts to assure him of Washington’s resolve to maintain a tough position versus Iran despite the recently reinvigorated diplomatic process, The New York Times reported.

“We will need to know that actions are being taken, which make it clear, undeniably clear, fail-safe to the world, that whatever program is pursued is indeed a peaceful program,” Kerry told reporters in a brief press statement before a meeting that was originally scheduled to last seven hours.

“No deal is better than a bad deal,” he added, echoing a statement he made earlier this month.

Kerry added that the US would “pursue a diplomatic initiative but with eyes wide open,” and said Iran would have to be held to the same standards as other states if it was to prove its nuclear program is peaceful.

Netanyahu told America’s chief diplomat that ongoing negotiations with Iran should insist that Tehran end all enrichment of uranium, get rid of any fissile material and close water plants and underground bunkers whose sole conceivable purpose, he said, was to build a nuclear bomb.

“I think a partial deal that leaves Iran with these capabilities is a bad deal,” Netanyahu told Kerry.