American-Israeli Residing In Israel Running For Mayor Of Pittsburgh

Home » American-Israeli Residing In Israel Running For Mayor Of Pittsburgh 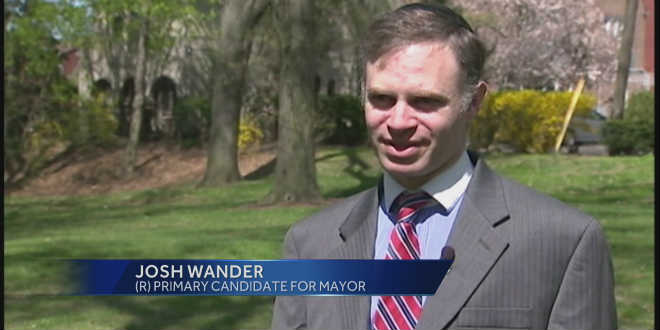 Joshua Wander, a 43-year-old father of six from the Ramat Beit Shemesh is running on the Republican ticket for Mayor of Pittsburgh, Pennsylvania, according to the Jerusalem Post.

Wander, who recently moved to Israel to take a job as an independent security consultant said that he would be willing to terminate his current contract if he were to win the election, which will take place on November 5.

“I sort of fell into the position of being nominated,” Wander told The Jerusalem Post on Tuesday, explaining that because other potential Republican candidates dropped out at the last minute, he was essentially chosen by default.

According to local news station WPXI, Wander’s absence from a candidate’s forum on Monday led Bill Peduto, the Democrat running for the office, to quip: “I don’t think we’re going to be having any debates, but that’s OK.”

Wander has stated that he intends to return for debates, and the local Republican chairman told the Pittsburgh Post Gazette that the “peripatetic candidate,” as the paper has dubbed Wander, “hasn’t been gone that long” and that “he’ll be back.”

According to experts, Wander’s odds of winning is not high and his absence will not improve his chances.

Pittsburgh has not elected a Republican mayor since 1934. Wander says he is running to give residents an alternative.

“It’s not a matter of if I win or lose,” he told the Post. “I already won the election by virtue of the fact that I am giving the electorate the other option that they wouldn’t have otherwise.”

He added that despite having sold his house prior to coming to Israel, he was here only for work and has maintained a residence in Pittsburgh in case he is elected.

“I did sell my house there.

That was a question of the market being very profitable at the time. It was a good time to sell. It had nothing to do with our subsequent move,” Wander stated.

He couldn’t be “too explicit” about his work here, he said, but was willing to say that “it is understood that as soon as I win as mayor of the city of Pittsburgh I will cancel my contract” and go back.

“I have a family with six children and I have to support them, and especially considering the history of the Republican party [in Pittsburgh], I can’t quit my day job and decide I’m just going to run full time,” he added.

Wander originally came to Israel as a student in 1987, and subsequently served in the IDF and got married before returning to the US to further his education at a local university. During his time in Israel, he says he became an activist with the anti-Oslo Accords Zo Artzeinu movement, worked as an advisor to the Moledet Knesset faction and even spent time as an editor at JPost.com.