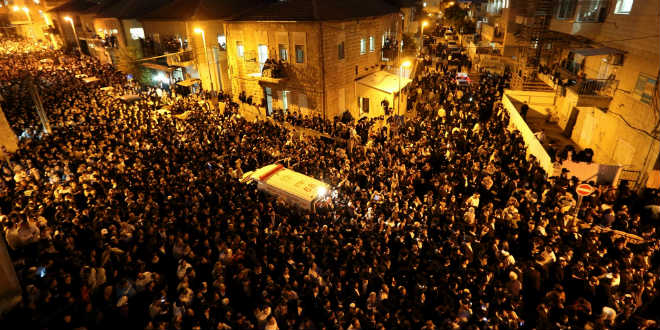 Who is the man that desireth life, and loveth days, that he may see good therein?

Funerals are a time for introspection, self-realization, awareness and humility. Aside from facing the stark reality of their own mortality, burial forces a person to take stock of who they are and what they have represented up until that very second at the graveyard.

More than 800,000 flooded the narrow streets of Jerusalem on Monday to pay their final respects to former Sephardic Chief Rabbi Ovadia Yosef. The outspoken political and religious leader, no matter what one thought of him, was a great Torah mind and a highly influential figure. Jerusalem was so congested that cars were parked on the highway leading into the city, with the drivers trekking to the funeral on foot. It was the single largest funeral in Israeli history and for a country that has seen so much sorrow that is not an insignificant fact.

While the staggering turnout may have been awe-inspiring it was hardly surprising to those who understand funerals and mourning in the Jewish faith. Death, like life, according to Judaism, is about sanctifying G-d and showing respect for your fellow man.

Traditionally, Jewish mourners recite the Kaddish, a hymn of praise to G-d. Although Kaddish contains no reference to death, it has become the prayer for mourners. One explanation is that it is an expression of acceptance of Divine judgment and righteousness at a time when a person may easily become bitter and reject G-d. Another explanation is that by sanctifying G-d’s name in public, the mourners increase the merit of the deceased person. Kaddish is a way in which children can continue to show respect for their parents even after they have died. When a Jew dies his body may return to the ground, but Jewish tradition instructs those who survive him to do all they can to ensure that the soul ascends to the highest of places. The Jewish message in death is that in the times of our greatest despair we have faith in G-d, humanity and the goodness of the world.

The radical Palestinian population, including the Fatah-based Palestinian Authority which Israel is currently in peace negotiations with and claims to act in the name of their G-d, does not find such grace in death. Death, for the radical Muslim, is something to be worshipped in and of itself. The Palestinian animals who slaughtered two Israeli soldiers last month, the one who shot a 9 year old girl in her front yard last week and the ones who beat a man to death on Thursday night with crow bars does not find a higher meaning in death. They, in fact, worship it.

Brilliant professor of history, terrorism and psychology, Dr. Anna Geifman, discusses this love of death, or thanatophilia in her riveting book “Death Orders: The Vanguard of Modern Terrorism in Revolutionary Russia”. Dr. Geifman first explains the existence of thanatophila in Russia during the first decade of the 20th century. She then explains that, “worldwide is also radical Islamists’ predilection for death. ‘We tell them,’ the Jews and the Christians, Mufti Sheik Ikrimeh Sabri declared at the Al Aqsa Mosque in Jerusalem, ‘in as much as you love life, the Muslim loves death and martyrdom’.” Geifman goes one step further, explaining how radical Islam has adopted a death-cult culture through the “aesthicization of death”. Geifman supported this theory with the often televised decapitation videos where “on stage is a masked terrorist, playing the executioner; around him are several accomplices with guns and knives. He reads a list of demands before a TV camera. The victim is on his knees, weeping and begging for mercy. The viewer sees his agony as the leading actor of the horrid reality show severs his head, while the other participants chant ‘Allahu Akbar.’ The slayer displays his bloody trophy, and together the terrorists recite verses from the Qur’an.”

This is the nature of the people Israel is forced to deal with. The radical Muslim thantalophile is not the rare affliction of a few; it is the pan-Islamic cultural doctrine. Palestinian Authority President Mahmoud Abbas, who according to the United States is a great moderate and Israel’s last great hope for peace, has admitted on live television to sending Jihadists to kill innocent Israelis. Only a person who extolls death has no shame admitting he has commissioned it against blameless victims.

The unfathomable turnout of almost one-sixth of the Jewish Israeli population, the Jewish State’s single most significant celebration of a man, the life he lived and the ideals he represented juxtaposed to the heinous death-worship seen in Islamic culture should exhibit to the world the true nature of the Middle East and its actors. If the recent murder of Israeli civilians is not convincing enough for the Israeli government to withdraw from the current peace talks, perhaps Rabbi Ovadia’s funeral will. Hopefully, after wrapping their minds around the tremendous celebration of life that the Rabbi’s memorial displayed, Israeli, American and the rest of the civil world’s leadership will realize that there is no negotiating with the devotees of death.