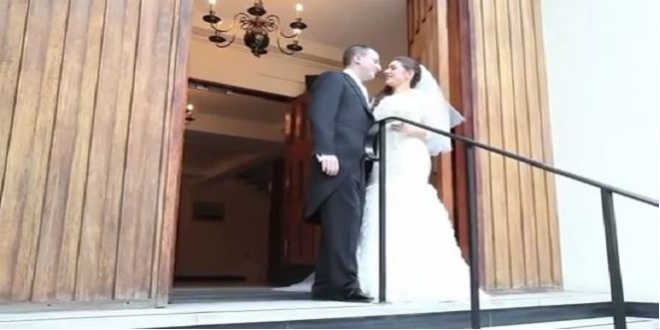 Go from the presence of a foolish man, for thou wilt not perceive the lips of knowledge. (Proverbs 14:7)

A British videographer captured himself on camera making a number of highly offensive anti-Semitic comments on camera at a Jewish wedding he was hired to film, according to an article and video clip posted on YouTube by The Jewish Chronicle on Thursday. The offensive slurs even included statements justifying Hitler’s attempt to wipe out the Jewish people.

The man heard in the video, identified by the Chronicle as videographer Anthony Aurelius, unleashes an anti-Semitic tirade while filming the wedding of Claudia and Stan Gocman in central London.

While he dismisses the bride as “not very attractive at all,” he tells his assistant: “some of the Jewish women are very beautiful to look at, but I can tell you they’ll be right f**king cows… very f**king snooty.”

“They’re very like … like they’re better than everyone else because they’re from Israel or something,” he adds.
He also asserts that “these people” have never been respected anyway, nor have they ever respected themselves.

While shooting festivities on the dance floor he later remarks, “Mental, Israeli dancing, isn’t it?” before reiterating his opinion that Jews think they are better than everyone else.

His assistant responds with a comment about the Holocaust, to which the cameraman replies, “I don’t think I blame Hitler.”

The Gocmans told British media that the cameraman had sent the full unedited version of the video after initially sending them one of another client’s wedding, and later sending a film of such poor quality that they requested to edit it themselves.

After being flagged about the content of his video, Aurelius reportedly sent a handwritten letter, obtained by London-based newspapers, to the Gocmans. The latter wrote to the couple: “I do not really know what to say. I see now my character is weak and I need to look at myself. I am deeply sorry I offended you. I have enclosed a cheque for a full refund and am really sorry.”