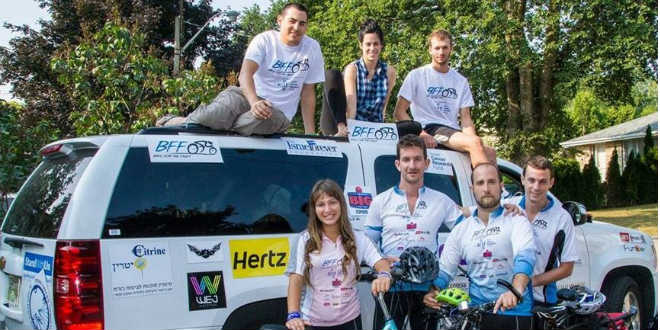 He that is gracious unto the poor lendeth unto the LORD; and his good deed will He repay unto him. (Proverbs 19:17)

Israeli cyclist Tom Peled completed his most recent biking tour in the United States late last month in order to raise money for cancer research, according to The Times of Israel. In early September, the 26-year-old Israeli celebrated his birthday by biking for 26-hours, non-stop. Starting in Hartford, Connecticut, the charismatic Peled biked 160 miles to New York City, with just a couple of bathroom breaks.

Since 2011, he has crossed two continents on his bike – named Amanda – including the hottest summer on record in Death Valley.

On Friday, Peled and six teammates wrapped their second “Bike for the Fight” US tour in Washington, DC. Since starting from Toronto in August, the team biked more than 1,500 miles, visiting college campuses and Jewish communities along the way. There are another two weeks of off-cycle fundraising events and though they’ve raised some $80,000 so far, the team hopes to break its 2012 record haul of $100,000. The Israelis had flown back to Toronto last week to lead a charity spin-a-thon. The three-hour event yielded a whopping $40,000 donated toward cancer research — a record coup for the tour.

Peled was first inspired to this extreme act of charity after his father, Rami, was diagnosed with a very rare and incurable type of cancer. The cancer is diagnosed in only about five Israelis each year.

“My father was the kind of person who you meet and after just five minutes, you feel you’ve known him all your life,” Peled said.
As the biker finished high school and entered the Israeli army, his father battled cancer. Instead of dying within months – as doctors had predicted – Rami fought back. He continued to enjoy life, including a penchant for public singing and celebrating family milestones.

“The worse my father’s physical condition got, the better his spiritual condition got,” Peled told The Times of Israel.
“My father was not ready to give up, and he maintained constant faith that he could overcome the disease,” Peled said. “He bravely went through several surgeries and hospitalizations.”

After his father passed away in 2011, beating all of the doctors expectations, Tom decided he needed a positive way to channel his grief and took up cycling.

During a three-month solo journey, Peled biked from Germany to Spain’s west coast. His odyssey of “hope, grief and life” took him through London, so Peled wasn’t looking for the shortest route across Europe. He passed through six countries and logged more than 3,000 miles, often in cold, rainy weather.

“What I found to be truly remarkable and unexpected was the warm and enthusiastic response of local residents who I met along the way,” Peled said. “These strangers became fast friends, assisting me to complete my challenge.”

Inspired by his European adventure, Peled returned to Israel and created a nonprofit, “Bike for the Fight,” to raise funds for cancer research. He decided to spend the summer of 2012 biking from Los Angeles to New York City, and raise as much money and awareness along the way as possible.

What started as Peled’s fantasy wound up raising $100,000 for the Israel Cancer Research Fund. Since 1975, the organization has given more than 2,000 grants to outstanding cancer researchers throughout the Jewish state.

“If you have a little bit of chutzpah, you can reach anything,” Peled said. “People want to do good, they just need to be pointed in the right direction.”