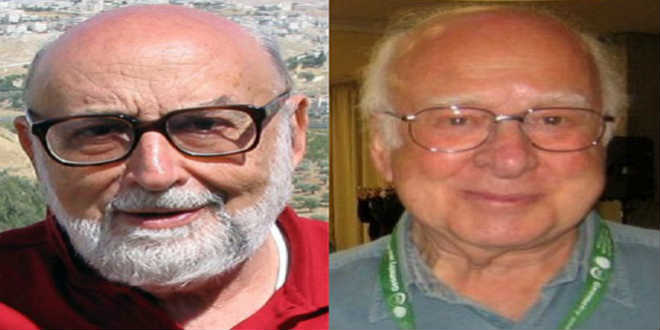 Of old Thou didst lay the foundation of the earth; and the heavens are the work of Thy hands. (Psalms 102:26)

Tel Aviv University Professor and Holocaust survivor Francois Englert has been awarded the 2013 Nobel Prize in Physics, along with his partner Peter Higgs on Tuesday, according to the Jerusalem Post. The research team won the award for their prediction of the Higgs boson – the particle that explains how elementary matter attained the mass to form stars and planets.

Englert is an 80-year-old Belgian Jew who is married to an Israeli women. He is a professor emeritus at the Free University of Brussels and has had strong research ties with Tel Aviv University for the past 30 years.

In 1984, he was appointed as a fellow of the Mortimer and Raymond Sackler Institute of Advanced Studies, which aims to promote academic excellence at TAU by inviting and hosting experts in different academic fields from outside the university. He holds the status of senior professor at TAU’s School of Physics.

As a Sackler fellow, Englert was invited to the university for two weeks last April and delivered a number of lectures. In one of them, he presented students with the work that won him Tuesday’s Nobel Prize, a discovery that has been hailed as one of the most important in physics.

The Higgs boson is the last piece of the Standard Model of physics that describes the fundamental makeup of the universe. Some commentators – though not scientists – have called it the “God particle,” for its role in turning the Big Bang into an ordered cosmos.

Higgs’s and Englert’s work, which was developed at CERN, the European Organization for Nuclear Research, shows how elementary particles inside atoms gain mass by interacting with an invisible field pervading all of space – and the more they interact, the heavier they become. The particle associated with the field is the Higgs boson.

To find the elusive particle, scientists at the Large Hadron Collider had to pore over data from the wreckage of trillions of sub-atomic proton collisions.

“I’m thrilled that this year’s Nobel Prize has gone to particle physics,” CERN directorgeneral Rolf Heuer said in a statement.

He added that Englert’s and Higgs’s discovery “marks the culmination of decades of intellectual effort by many people around the world.”

Asked how it felt to be a Nobel winner, Englert told Reuters: “You may imagine that this is not very unpleasant, of course. I am very, very happy to have the recognition of this extraordinary award.”

Prof. Shimon Yankielowicz of TAU’s School of Physics, a colleague and close friend of Englert, told The Jerusalem Post on Tuesday that he was “thrilled and proud” of Englert’s win.

“The fact that we manage to attract to [the Sackler] program leading scientists who are willing to get the appointment at TAU, such as Prof. Englert, is a tribute to the strong scientific standing of the university at large and the School of Physics in particular,” he added.