Over 800,000 Pack Jerusalem For Largest Funeral In Israeli History

Home » Over 800,000 Pack Jerusalem For Largest Funeral In Israeli History 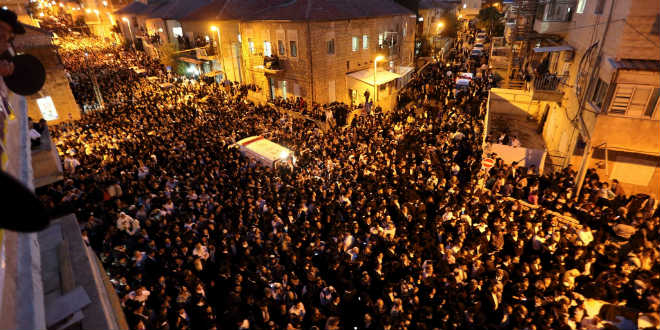 In that day shall there be a great mourning in Jerusalem, as the mourning of Hadadrimmon in the valley of Megiddon. (Zechariah 12:11)

Over 800,000 people flocked to the Jerusalem area on Monday to mourn the passing of former Sephardic Chief Rabbi Ovadia Yosef, according to The Times of Israel.The outspoken spiritual leader passed away earlier that day at the age of 93.

“We’ve been left orphans,” Aryeh Deri, the political leader of the Shas, the Israeli political party of the Sephardic haredi community that was founded by Rabbi Yosef, steered by Yosef, wailed at a funeral ceremony. “We have no father. We have no leader.”

In addition to his political accolades, Rabbi Yosef was remembered as a giant of Torah learning who had a penchant for bringing thousands closer to Jewish halakhah through lenient rulings.

“His greatness wasn’t measured but rather it was felt as a spiritual wind in every corner, lighting up the darkness in unexpected places. When I met him I sensed he was a great man with an unbelievable memory and the wisdom to share his knowledge with others. His contribution was his love for Israel and he solved problems no-one else could solve using his wisdom and spirituality,” President Shimon Peres said in a eulogy after Yosef’s death.

The city of Jerusalem came to an utter standstill following the rabbi’s passing as nearly 850,000 people, officials said, came to pay their last respects, making it the largest funeral in Israel’s history. 300 attendees required medical attention, including 17 who were evacuated to hospitals and one woman who gave birth.

“The world of yesterday will not exist tomorrow. There was no one like him, and there will not be in the future,” lamented Yosef’s son, Sephardic Chief Rabbi Yitzhak Yosef.

“Father, father,” another son, Rabbi David Yosef, cried out, “you raised us in the Torah, we were fortunate to be your sons. Every time we had a hard question, you brought us in to the world of halacha…Father, who will be ask now? Father, with whom will we speak?”

Batia Siebzehner, an expert on Shas at the Hebrew University in Jerusalem, said Yosef’s crossover appeal would make it difficult to replace him. She said Shas supporters were divided between ultra-Orthodox followers and working-class Sephardic Jews attracted to his message of ethnic empowerment.

“Shas is a social movement, a political party and a new interpretation of religion,” she said. “Nobody has the capacity to act as a glue between the different groups.”