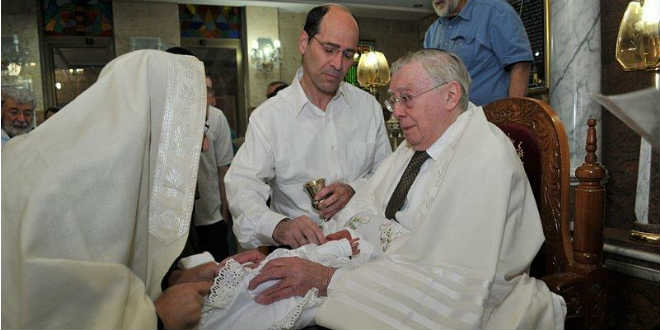 “And ye shall be circumcised in the flesh of your foreskin; and it shall be a token of a covenant betwixt Me and you.” (Genesis 17:11)

Israel’s foreign ministry issued a statement Friday denouncing the European Union’s recent resolution against circumcision.  Saying that the resolution “fosters hate” and racism, ministry spokesman Yigal Palmor said, “Circumcision of male children is an ancient religious tradition of two important religions, Judaism and Islam, and it is also common among some Christian circles.”

The Parliamentary Assembly of the Council of Europe passed the controversial resolution on Tuesday, calling male ritual circumcision a “violation of the physical integrity of children.”  Other practices included in the resolution are female genital mutilation, early childhood medical interventions in the case of intersexual children, corporal punishment, and the submission to or coercion of children into piercings, tattoos or plastic surgery.

Although not binding, the resolution calls on member states to “initiate a public debate, including intercultural and interreligious dialogue, aimed at reaching a large consensus on the rights of children to protection against violations of their physical integrity according to human rights standards,” and ultimately “adopt specific legal provisions to ensure that certain operations and practices will not be carried out before a child is old enough to be consulted.”  As far as male circumcision is concerned, member states are asked to “clearly define the medical, sanitary and other conditions to be ensured for practices such as the non-medically justified circumcision of young boys.”

In his statement, Palmor specifically objected to the comparison of ritual circumcision of males and the practice of female genital mutilation. Referring to the latter as a “barbaric practice,” he called the comparison “either appalling ignorance, at best, or defamation and anti-religious hatred, at worst.”  He appealed to the council to immediately annul the resolution.

Israel considers the resolution “an intolerable attack both on the respectable and ancient religious tradition that lies at the base of European culture, and on modern medical science and its findings. This resolution casts a moral stain on the Council of Europe, and fosters hate and racist trends in Europe.”

The council’s position did not develop in a vacuum.  Last year in Germany, government legislation was required to confirm the parents’ legal right to circumcise their sons after a lower court ruled it a form of mutilation and laid charges against two rabbis.  The practice is also coming under attack in Scandinavia, as well as in other German-speaking countries.  Detractors appear on both the left- and right-wings, as secularists find allies among those fearful of Islamic influence.