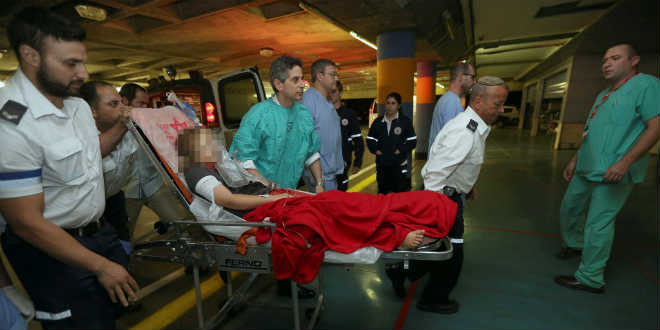 The angel who hath redeemed me from all evil, bless the young; and let my name be named in them, and the name of my fathers Abraham and Isaac; and let them grow into a multitude in the midst of the earth.’ (Genesis 48:16)

A Palestinian gunman who shot a 9-year old girl in the Israeli West Bank town of Pisgaot is still at large and has likely fled the area the IDF reported early Sunday, according to The Times of Israel. The search was set to continue throughout the day, and Psagot residents were told they could return to their normal routine, after overnight fears that the attacker was still hiding out in the settlement.

The child, Noam Glick, was reportedly shot by a Palestinian at close range while playing in her front yard. “I went outside, and Noam told us there was an Arab there,” the victim’s father, Yisrael Glick, told Army Radio on Sunday morning. “I understood this was a security situation, dangerous to our lives, the most frightening thing that can happen to a family — that a terrorist came into the house.”

He said that he heard gunshots and was able to pull his daughter into the house. By the time he emerged from the house again with his weapon, he said, the attacker had fled.

Glick said that the attacker was “startled” by the girl playing in the yard, “so instead of entering the house he shot her.”

Doctors at Jerusalem’s Shaare Zedek medical center said the girl, who did not lose consciousness during the incident, had sustained light injuries and was in good condition. It was “not clear” whether she had been shot or stabbed, according to hospital physician Dr. Danny Fink.

“The girl’s survival is a miracle,” Fink told Maariv Sunday. The victim, who underwent surgery overnight, had a deep gash along the base of her neck and her upper chest area and was wounded in one ear, he said.

Officials have said that they do believe this was a terror attack. Authorities said a breach in the Psagot fence was discovered overnight, with signs of forced entry and footprints nearby. An “improvised weapon,” believed by officials to be the one used in the attack, was found outside the settlement.

Shortly after the incident, Israeli forces numbering in the hundreds entered the neighboring Palestinian town of al-Bireh, where the shooter was thought to have come from. Security forces, said to include troops from elite IDF units, began the search on the outskirts of the town, near a soccer stadium, and Palestinian security forces had been called in to clear the area.

The Palestinian Ma’an news agency reported two Palestinians were lightly injured by rubber bullets in an altercation with troops that erupted during the incursion.

Shortly after the Psagot attack, shots were reportedly fired at a motorcyclist on the road between Psagot and the nearby settlement of Kochav Ya’akov. No injuries were reported. A police official also said rocks were thrown at vehicles on the road leading into Psagot after the child was shot.

Psagot residents were told to stay in their homes past midnight Saturday; those with firearms were instructed to keep them by their side. Soldiers conducted a house-to-house search of the settlement. Residents were informed via text message to anticipate a knock on the door, to answer in Hebrew, and to await identification.

Deputy Defense Minister Danny Danon on Saturday urged Israeli peace negotiators to rethink current talks with their Palestinian counterparts, following the shooting of an Israeli child in the West Bank, according to the Jerusalem Post.

He insisted that the Saturday shooting of a nine-year-old girl in the settlement of Psagot proves “those who support terrorism” can not be trusted partners in peace.

He then vowed to catch the alleged Palestinian shooter, saying “If a person shoots a nine-year-old girl, their blood is on their own head.”

“We must put an end to hypocrisy of the Palestinian leadership,” Danon added.

“This is a result of the Palestinian Authority’s system of incitement and two-faced policy. On the one hand, they say they want peace, and on the other hand they incite against Israel.”

According to Hotovely, “nothing has changed since Arafat; there was no partner and there is no partner for peace.”